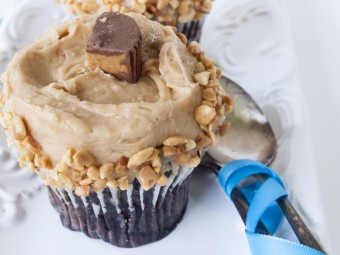 Doing these types of articles always make me really hungry.

Today I found out the history of Reese’s Peanut Butter cups.

A popular chocolate cup filled with delicious peanut butter, Reese’s Peanut Butter Cups were created by a man named Harry Burnett (H.B.) Reese. Reese was born May 24, 1879 in Pennsylvania to a farming family. He married in 1900 and went on to have sixteen children. (Yes, 16!) By 1903, not surprisingly, he was struggling to support his growing family, so took on all manner of jobs from butcher to factory worker.

In 1917, Reese found an advertisement to work on a dairy farm owned by Milton S. Hershey, owner of the Hershey Chocolate Company, in Hershey, Pennsylvania. Though he didn’t know it at the time, taking the job would shape the rest of Reese’s future. He worked on the farm for several years and later began working in the company’s chocolate factory, where he became inspired by Hershey and set out to make his own chocolates.

Initially, Reese considered his chocolate venture to be a means of providing a little extra money for his family. He started creating confections in his basement, naming bars and candies after his many children. He used fresh ingredients for his candy creations, along with a large quantity of Hershey’s chocolate.

In the 1920s, Reese’s basement-born enterprise was doing much better than expected, with the candies selling successfully to the local market. He decided to take the business even more seriously and set up the H.B. Reese Candy Company. In 1928, Reese also started selling chocolate and peanut butter confections he simply called peanut butter cups or “penny cups” as they cost just one penny each at the time. They were so successful that Reese was able to sell five-pound boxes of the cups to local retailers for their candy displays.

Reese was soon able to quit his job at the Hershey factory to concentrate on his own business. He even built a 100,000 square foot factory on Chocolate Avenue in Hershey, Pennsylvania, making a wide assortment of candies including raisin clusters and chocolate covered dates. However, during World War II, Reese was forced to abandon his other projects due to scarcity of supplies and economic hardship. He chose to focus solely on his peanut butter cups, which were his most popular product, and the investment paid off.

Unfortunately, as his cups were growing rapidly in popularity, Reese died unexpectedly of a heart attack in 1956, just a few days before his 77th birthday. Seven years later, six of Reese’s sons decided to sell the family business. The Hershey’s Chocolate Company, that had inspired Reese, purchased the H.B. Reese Candy Company for $23.5 million in 1963 with H.B. Reese’s children getting roughly a five percent share in the Hershey Company (which is today worth about $20B, 5% of which is $1B).

Reese’s Cups continued to prosper under Hershey’s. There have been dozens of variations on the candy, including “big cups,” miniatures, and minis, as well as dark chocolate, white chocolate, caramel, marshmallow, and hazelnut cream flavours. Other variations include Reese’s cookies, Reese’s Pieces, and Reese’s Puffs Cereal (of the “It’s Reese’s for breakfast!” fame—promoting “healthy” breakfast options for children everywhere).

The candy is now available in many countries around the world and enjoyed by millions of people every year. Starting from its humble beginnings in the basement of a determined entrepreneur just looking for a way to support his enormous family, it’s now an extremely popular candy, counted among the top ten favourite chocolate treats in the U.S.