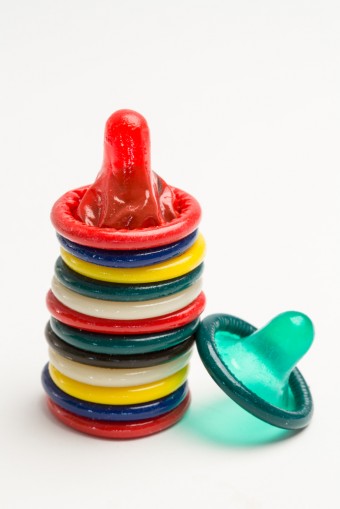 Whether one knows them as johnnys, rubbers, raincoats, jimmy hats, or the demure “protection”, people the world over know a condom when they see one. Established monikers notwithstanding, the origin of the word “condom” remains a matter of some historical uncertainty. The most commonly told tale has the origin of the word in its supposed creator, Dr. Condom. The fabled Dr. Condom, a physician living during the reign of Charles II, apparently sought to do his patriotic duty by creating and popularizing a device intended to protect the, ahem, Crown Jewels.

However, both etymologists and historians have dismissed the Dr. Condom story, and with good reason. Condoms were being used long before Charles II’s reign (1660-85). The oldest contender for first recorded condom use can be found in the French Grotte des Combarrelles, a cave with drawings, some 12,000 to 15,000 years old, displaying condom use. Other archaeological evidence finds evidence of silken, oiled paper condoms in ancient China, and tortoise shell and animal horn condoms in ancient Japan (possibly having some bearing on the origins of the word “horny”, a theory yet unconfirmed). This, in tandem with the fact that no amount of etymological excavation can find any historical record of a Dr. Condom, makes said doctor at best, a Johnny come lately, and a worst (read: probably), fiction.

However, the condom’s name origins remain as shady as Dr. Condom’s, with the word appearing seemingly out of thin air in a 1666 English Birth Rate Commission report, which found that the use of “condons”, had put a recent dent in the fertility rate. Hot on the heels of the report, in 1705 a letter referred to the 2nd Duke of Argyll, John Campbell, as arriving in London, and bearing on his person, a

The word quickly made it into public print, courtesy of John Hamilton Belnavis’ 1706 poem, A Scottish Answer to British Vision. A political opponent to the aforementioned Duke of Argyll, Belnavis, rebutting the Duke’s vision of Scottish and British unification, penned a verse that was no doubt stinging by 18th century standards:

When Reasoning’s answer’d
By seconded Votes,
And speeches are banter’d
By outfield turn-coats,
Then Sirenge and Condum
Come both in request,
While virtuous Quondam
Is treated in Jest.

By 1717, it seems that the term had become well established, with British physician Daniel Turner launching written condemnations of condom use in his tome, Syphilis. A Practical Dissertation on the Venereal Disease. While this was to serve as the opening salvo in one of the first debates within both the public and medical community as to the ethics of condom use and the condom market, the term, and the condom, were already popular commodities. Giacomo Casanova, arguably the most famous, and certainly the most amorous, of figures within the condom history, had already begun the first condom quality tests: blowing them up with air to check for holes.

By the 1900s, the future of the condom was set on a steady course, becoming cheaper, and thus more popular, due to rubber vulcanization creating a one-size-fits-all condom for the average Joe (or John).  The history of the term however, still remained obscure. Thus, beginning in the 1900s, several etymological origins were proposed of French, Persian, Italian and Latin extraction.

The French one seems to have ended in a cul-de-sac. Scholar Hans Ferdy, in 1904, proposed that “condom” is eponymously named after the village of Condom in Southern France. Despite a cosmetic similarity however, there seems no deeper etymological reason to make the connection, and Ferdy himself discarded the idea in favor of the Latin word condus, meaning, one who stores or preserves. While this seems true to the function of the device, Scholar William E. Kruck, in his seminal 1981 monograph “Looking for Doctor Condom”, in which he searches for the word’s origins, determined that condus had died out of popular usage by 500AD.

Paul Richter, in 1911, attempted a more exotic origin, proposing that word condom’s precursor was the Persian kondü or kendü, which means an earthen grain-storage vessel. Richter claimed further that the word matriculated into English through Greek and eventually Latin translations. However, the aforementioned WM Kruck, ever the pessimist, holds no truck with Richter’s explanation. Kruck, noting that the contraceptive abilities of condoms were realized far after the initial purpose of disease prevention, reasons that Richter’s usage would be anachronistic. Further, Kruck insists that though the Greek “Kondom”, which refers to a seed storage pot, is possibly a predecessor of condom, the relationship to the Persian kondü is purely coincidental.

Again returning to the indefatigable Kruck, it seemed that, having exhausted the other options, Kruck, researching Latin-English dictionaries found a Latin connection in the word condum, meaning a cup or pot. However, unable to trace the origins beyond the word condum, itself being a derivation of some previous work, Kruck let the matter drop there, concluding rather dispiritedly that the origin of the word was unknown and was ultimately, not Latin. Kruck’s final suggestion was to include among the possible contenders for condom’s origins, “conundrum: a riddle, difficult to put on”.

Kruck’s effort notwithstanding, research into the etymology of condom has continued undaunted. Among the outstanding contenders are the Italian guantone, a relative of the word guanto, or glove. Also throwing its hat in the ring is the Latin, conduma, as proposed in 1985 by the magisterially named Zacharias P. Thundy. Thundy, attempting to finish what Kruck could not, finds conduma, a conjunction of con (with) and duma (dome) to be the likely, euphemistic ancestor of the word “condom”. Finally, Aine Collier, gives the word “condom” its most recent paternity test in her 2007 work, The Humble Little Condom proposes that condom is a bastardization of the Latin cumdum, which means “scabbard” or “sheath.