Why are Women Called Sluts, Dames, and Broads?

August 31, 2012 Daven Hiskey
Rinni asks: Why are women sometimes called “sluts”, “dames”, and “broads”?  Where did these words come from? 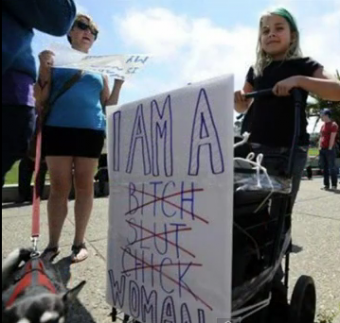 Origin of the Word “Slut”

“Slut” originally didn’t mean at all what it means today.  For instance, in a diary from 1664, Samuel Pepys writes,

“Our little girl Susan is a most admirable slut, and pleases us mightily, doing more service than both the others and deserves wages better.”

In modern day terms, this diary entry seems quite suggestive for a man to describe a servant girl such. However, at this time, while the term had begun to take on a more suggestive connotation of “woman with loose morals”, it still also was commonly used with the original meaning, that of a “messy, dirty, or untidy” woman or girl.  Because of this, it was frequently used at this time as a name for kitchen maids and servant girls, as Pepys was talking about in the above quote.

The word first popped up in English with this latter “slovenly” definition around the 14th century and by the 15th century had started to be used to describe promiscuous women as well.  It also came to be a somewhat common term for an ugly woman, as in a quote from 1715, “Nor was she a woman of any beauty, but was a nasty slut.”

In the 19th century in England, slut still retained something of its original meaning, even so far as garbage cans being called “slut-holes”, meaning a hole for rubbish.  This can be seen in a Saturday Review snipped from 1862, “There are a good many slut-holes in London to rake out.”

Much more recently, Helen Fielding in Bridget Jones’s Diary used the word “slut” with its original meaning, “Check plates and cutlery for tell-tale signs of sluttish washing up…”, so the original meaning is still around, albeit much less commonly used now than the “promiscuous” definition.

As to where the word “slut” came from, that isn’t entirely known.  It may have come from the German “schlutt”, meaning “slovenly woman” or the Swedish “slata”, meaning “idle woman”.

Origin of the Word “Dame”

“Dame” popped up in English around the 13th century from the Old French “dame”, meaning “wife / mistress”, which in turn came from the Latin “domina”, meaning “mistress of the house, lady”.  “Domina” has its origins in the same Latin word that “domestic” ultimately came from, namely “domus”, meaning “house”.

In the 13th century, “dame” was synonymous with “female ruler” (and indeed even today “Dame” is considered the female equivalent of “Sir”, as in knighthood, in the UK. Further, originally a knight’s wife was given the title of “Dame”, though this changed to be “Lady” a few centuries after “dame” entered English.) By the 14th century, “dame” extended to also being sometimes used generically as a title for a housewife.  Around the early 20th century in American English, “dame” started to be used as synonymous with the generic word “woman” and gradually over the course of the last century in American English has come to have derogatory connotations, despite its illustrious origins.

Origin of the Word “Broad”

“Broad”, as referring to a woman rather than something with great breadth, has slightly less certain origins.  It first popped up being used this way in the very early 20th century.  Theories as to its origin include simply referencing a woman’s broad hips, or perhaps from the American English “abroadwife”, which was a term for a slave woman, or just a woman who was separated from her husband.

Another popular theory is that it came from a slang term for a ticket, such as a train ticket, a meal ticket, a sporting event admission ticket, etc.  This slang term became common around 1912 and by 1914 “broad” was being used, among other things, to refer to a prostitute, thus a pimp’s “meal ticket”.  “Broad” possibly came to mean “ticket”, from the 18th century practice of sometimes calling playing cards “broads”.  This derives from the fact that in the early 20th century, many types of tickets often resembled playing cards.  This theory is attested in the 1914 work A Vocabulary of Criminal Slang, by Jackson and Hellyer where they define Broad as:

Noun, Current amongst genteel grafters chiefly. A female confederate; a female companion, a woman of loose morals. Broad is derived from the far-fetched metaphor of ‘meal ticket,’ signifying a female provider for a pimp, from the fanciful correspondence of a meal ticket to a railroad or other ticket.

Whatever the case, when “broad” first showed up as referring to a woman, it generally was used to signify a prostitute or immoral women.  This gradually changed somewhat in the century since with “broad” slowly coming to be less used as a derogatory term and more used just to be synonymous with “woman”.  One of the earliest instances of this was in the 1932 “Guys and Dolls”, where one characters refers to another as a broad without any negative connotation.

This change is in contrast to “dame”, which used to be solely an honorific title that has gradually come to be used in a derogatory sense.  As Frank Sinatra said, “Calling a girl a ‘broad’ is far less coarse than calling her a ‘dame’.”

In the cases of “broad” and “slut”, there have also been recent efforts to “take back” the terms and spin them in a more positive light.  For instance, in A Dictionary of Words About Women, by Jane Mills, a broad is defined as “a woman who is liberal, tolerant, unconfined, and not limited or narrow in scope.”  “Slut”, while still retaining the same modern “loose woman” connotation, has begun to be a label worn proudly in some circles, though not without controversy.  As Rebecca Traister in the New York Times states,

…at a moment when questions of sex and power, blame and credibility, and gender and justice are so ubiquitous and so urgent, I have mostly felt irritation that stripping down to skivvies and calling ourselves sluts is passing for keen retort…