The Fascinating History of Birth Control

April 5, 2013 Yona Williams 6 comments
Kerry asks: What did people use for birth control before modern methods like the pill and condoms? 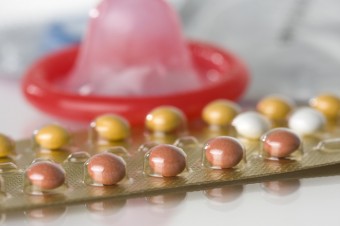 Beyond these devices and substances, one of the oldest known methods still in use today was coitus interruptus (a.k.a. “Pull and Pray” or “Withdrawal”), with the earliest documented use of this being found in the Bible in a story estimated to have been written about 2500 years ago.  This is the tale of Onan, who was supposed to be getting his brother’s widow, Tamar, pregnant to provide an heir for his deceased sibling.  Instead, he simply had sex with her and withdrew “spill[ing] his seed on the ground” to make sure she wouldn’t get pregnant.

Surprisingly, while this method has something of a bad reputation as not being very effective, in fact, it’s about as effective both in real world use and “perfect world use” as modern latex condoms with an estimated “perfect” use failure rate of only 4%, compared to the condom’s 2%.  While “real world” numbers on condoms and coitus interruptus vary from study to study, on average it seems the withdrawal method has a “real world” failure rate of around 18%, give or take about 5%-10%, compared to the condom’s 17%, again give or take about 5%-10%.

It turns out, performing the withdrawal method “perfectly” isn’t too complex either- the withdrawal part being obvious and simply a matter of doing it.  Something slightly less obvious leads to the thing that is the primary reason for failure when people get the “withdrawal” part correct.  The reason is generally thought to be because of residual sperm in the male’s urethra from a previous, but very recent sexual encounter.  This problem can be gotten around simply by the man urinating between sexual encounters-  so not too complex a thing to get right.

Previous to the Roman Empire, evidence suggests that the withdrawal method was one of the primary forms of contraception used.  This fell out of popularity with the Romans who favored other methods available at the time, most of which have been lost to history, but from anecdotal evidence many of them seem to have been quite effective themselves. One that is known is that they used Queen Anne’s lace, which is still occasionally used as a form of contraception in some parts of the world, such as India, and has been shown to have anti-fertility properties.

After the fall of the Roman Empire, most methods of contraception fell out of practice in the Western world partially from the influence of Christianity, as birth control historically was seen as sinful within the church, and perhaps also simply because the knowledge of many of the effective methods was lost.  Around the early 19th century, however, the withdrawal method saw a huge resurgence and was one of the leading forms of contraception in the world until methods such as the modern condom and the pill were introduced.  Today, around 2.5% of the world’s population still uses the withdrawal method as the primary method of birth control and an estimated 52% of people have used it at least once as a method of birth control.

Another contraception method that isn’t as new as many people think is the condom.  Although, early versions of the condom didn’t always cover the entire penis and, of course, they certainly weren’t made of latex. For example, love-making in Asia often relied on devices called glans condoms, which addressed only the head of the penis. Animal parts were a popular choice for making these condoms. The Chinese fashioned theirs out of lamb intestines, while the Japanese used tortoise shell (called ‘kabutoga’) or animal horn throughout the 1870s.

Animal offal is the internal organs and entrails of butchered animals, and not the first thing that comes to mind concerning birth control. But to the Europeans living during the mid-1700s, these organ meats were transformed into their way of preventing babies. Slaughterhouse workers would style early condoms out of sausage skins. Interestingly, Jules (Julius) Schmid, the creator of the now-infamous Sheik and Ramses brands of condoms was once a sausage-maker who made lamb-gut condoms in the 1880s.

Glans condoms were also made out of fabric. There are ancient accounts suggesting early Egyptians living around 1000 B.C. used linen sheaths during intercourse to protect against disease. In the 16th century, the Europeans also soaked linen sheaths in a chemical solution that was laid out to dry before use. Pieces of the cloth were measured to cover the glans of the penis, and later held in place with ribbon.

Fast-forward to one of the crowning achievements of the industrialized world, Charles Goodyear’s vulcanization of rubber in 1839 would eventually lead to the creation of the first rubber condom in 1844. Strips of raw rubber were wrapped around penis-shaped molds, which were later dipped in a chemical solution to cure the rubber. With a shelf life of a few months and being very durable, men could actually reuse these condoms!

In 1912, a new and improved way to manufacture condoms emerged – adding gasoline or benzene to the rubber to liquefy it. The latex condom was officially invented in 1920, and the consumers loved the stronger, thinner material with a shelf life of five years.

Inexpensive, easy to use, and effective at preventing the spread of certain diseases, condoms are now one of the most popular forms of contraception. However, despite the availability of some version of the male condom throughout much of history and the ease and free-ness of the withdrawal method, people still chose to find other methods for preventing pregnancy, some of which were not just bizarre, but downright dangerous.

Since women were historically viewed as playing a more significant role in getting pregnant, the number of available options for female birth control was much greater… and displayed a much higher level of inventiveness. For example, early topical and suppository contraceptives have included olive oil, pomegranate pulp, ginger, and even tobacco juice, which women would smear on and/or inside their vagina as an early spermicide.

According to the oldest recorded information regarding birth control, a document that is nearly 4000 years old- the Egyptian Kahun Gynecological Papyrus, which also happens to be the first known medical text- women used pessaries made out of crocodile dung and honey as a form of contraception. In hindsight, it was pretty smart to combine animal feces with an effective antibacterial substance (the honey- see why honey works as a good antibacterial agent and other medicinal purposes it can be used for here). In addition to physically preventing sperm from fertilizing an egg, the acidic properties of the dung may have served as an effective spermicide. In India, elephant dung has been used in this same manner.

Another method the text describes on top of the “crocodile dung” was the use of acacia gum, which is much less mentally repulsive and, indeed, does work as a spermicide.  It can even be found in some spermicide products today, unlike crocodile dung.

Fast forward a few thousand years and in 1832, Dr. Charles Knowlton popularized the method of syringe douching as a method of contraception, and throughout the U.S., women would use his douching mixtures comprised of vinegar, zinc sulfite and liquid chloride to prevent pregnancy. It wasn’t until after 1850 that hard rubber syringes came into play. Before that, early syringes were made out of horn, bone or pewter.

Douching kits and solutions were sold during the greater part of the 1900s. At one time, American women painfully turned to the popular household disinfectant Lysol as a method of contraception. From the 1930s through the 1960s, the Lysol disinfectant douche was a top seller in feminine hygiene products. Not only did the Lysol douche later prove ineffective as a spermicidal, but its use also led to toxic effects, such as inflammation, irritation and burning sensations of the vagina and cervix.

Getting away from Lysol, the first commercially produced birth control pill (called Enovid-10) made an appearance on the market in 1960. Just before the FDA approved the use of synthetic progesterone and estrogen in pill form that works to prevent ovulation in women, the market offered “female pills” with oftentimes unidentified ingredients or questionable herbal concoctions used to induce or speed up menstrual flow as a way to provoke a miscarriage.

In the mid-19th century, preparations of loose herbs, such as pennyroyal, rue, hellebore, mistletoe, foxglove, Queen Anne’s lace, bloodroot, ergot and different mint plants, were steeped in hot water (like a cup of tea) or dissolved in alcohol before consumption. While herbs, such as tansy and pennyroyal, may have had a reputation for possessing abortive properties, they also “worked” by poisoning the woman.

Going back much further with the liquid birth control concoctions, it was also an unfortunate habit of early physicians to use chemical-laden drinks that blended lethal substances (like arsenic, mercury and strychnine) with grains, fruits and oils. Early physicians would suggest women drink the poisonous mixtures as a way to disrupt their reproductive systems, usually in very controlled dosages so as to prevent pregnancy without killing the woman (often through inducing a miscarriage if a fertilized egg is present.)

For instance, Soranus, a Greek gynecologist practicing during the 2nd century A.D., told women to drink the water that blacksmiths used to cool metal as a birth control method. In 900 B.C., Chinese birth control experts advised women to swallow sixteen tadpoles fried in quicksilver (mercury) immediately after sex.  Successful results that came from drinking toxic ‘remedies’ sometimes came with damage to the liver, kidneys and other major organs. Some women would never again have children in the future – becoming sterile or worse, died… in both cases, I guess the methods were indeed super effective at preventing pregnancy…

Not every oral or liquid contraceptive method was deadly, although perhaps the effectiveness is questionable. Acidic fruits and vegetables often played a role in early birth control. To prevent pregnancy, Arabian women would eat mashed pomegranate mixed with rock salt and alum. During the 1400s, drinking raw onion juice was a trick of the Italians. In 1600, the French ate cabbage after intercourse.

One of the most effective (and safe) liquid remedies for birth control was most likely lemon juice as a topical remedy. Specifically, to create a physical barrier in the vagina, women would insert soft wool soaked in vinegar or lemon juice to prevent pregnancy. Positioning half a lemon in the vagina was also not uncommon, and serves as an example of an early form of the cervical cap.

Another seemingly very effective birth control method used by the Ancient Greeks was the Silphium plant, which is now unfortunately extinct, and became so because of its extreme popularity for medicinal purposes, mainly for birth control.  Why it became extinct when it was “more valuable than silver” was because of failure after failure to try to grow it away from its natural habitat of a small stretch of land in what is now Libya.  Because of the small area it could be grown successfully and the extreme demand, by the 2nd century BC, the plant became extinct.

We’ve come a long way from the near 4000 year old method of crocodile dung and honey and even the more modern method of Lysol douching, but it’s surprising to see that so many ancient methods for birth control seem to have been remarkably effective and some, such as the basic withdrawal method and Queen Anne’s Lace, are still chugging along today as effective means of birth control.  So if we take anything from this, it’s that apparently from the beginning people have been trying to “have their cake and eat it too” in regards to sex and potential babies.