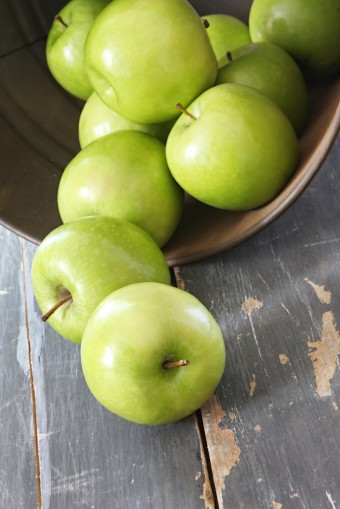 Maria Ann Sherwood was born into a farming family in England in 1799. Because of her parents’ work, she became interested in agriculture and began working on the farm as well. When she was just nineteen years old she married a man named Thomas Smith, who was also a farm labourer, and the pair managed a farm in Beckley for the next nineteen years, beginning a family of their own.

In 1838, government officials were recruiting people from agricultural backgrounds who possessed the skills desperately needed for farms in Australia. Along with several other families from the area, the Smiths boarded the Lady Nugent and arrived in Sydney on November 27, 1838. Upon their arrival, Thomas was given a job by Mr. Smart of Kissing Point, later to become Ryde, and earned £5 per year as a farm labourer.

Like most people in the area, the Smiths honed their skills as orchardists. Fruit abounded in the district. Between 1855 and 1856, the Smiths bought their own lot of land and began their own orchard. Maria Ann Smith enjoyed raising her own seedling apples, just as many of her neighbours specialized in other varieties of fruits. There are several different accounts about her discovery of her namesake apple, but the most likely one comes from an article in Farmer and Settler from 1924.

Herbert Rumsey, who published the article, was also an orchardist in the area and interviewed two other farmers who knew Granny Smith. They said that in 1868, Maria Ann Smith, then 69 years old, found the seedling growing by a creek on her property. She believed that the seedling had grown from French crab apples (it is now believed that the apple is a cross between the Malus sylvestris, or European Wild Apple, and the M. domestica, or domestic apple). Granny Smith began to cultivate this new apple tree. Yet another local, Edward Gallard, developed a large crop of them from cuttings from the first tree and continued to do so annually until his death in 1914.

The apples became widely popular in Australia and New Zealand. Displayed at the Castle Hill Agricultural and Horticultural Show in 1891, “Smith’s seedling” won the prize for best cooking-apple. In 1895, Granny Smith Apples were being produced at the Government Experimental Station in Bathurst, New South Wales on a large scale. Soon after, they were included on the list of fruits suitable for export put out by the Department of Agriculture. The apples were introduced to Great Britain in 1935. This particular apple is a relatively recent addition to the United States, where it was introduced in 1972 by Grady Auvil of the Auvil Fruit Company.

Unfortunately, Granny Smith herself never saw her apples gain commercial recognition. She died in 1870, just two years after discovering the apple seedling on her property. The apples were sustained and propagated by local orchardists until they became well-known, but it is Granny Smith who will be remembered as the woman who discovered one of the most well-known green apples.