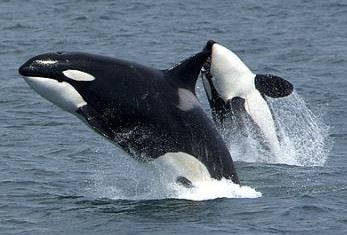 Today I found out “Killer Whales”, or Orcas, are actually dolphins.  In fact, they are the largest member of the dolphin family, Delphinidae.

Now strictly speaking, whales are marine animals of the order of Cetacea and occasionally Cetacea is used to refer to not just whales, but also porpoises and dolphins.  However, it generally excludes these latter mariner animals, which belong to the sub-order Odontoceti.  So depending on who you talk to dolphins, including the Orca, may be considered whales and dolphins or may be considered a separate marine animal from other whales.  But in either case, Orcas are one of the 35 species in the oceanic dolphin family, with its closest relative being the Irrawaddy dolphin.