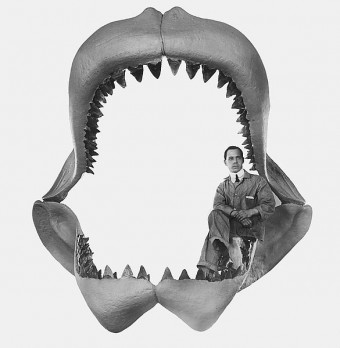 I, for one, welcome our new Megalodon overlords

Not only were its jaws exceptionally powerful, but the Megalodon had teeth as large as 18 cm long (7 inches- in fact, “Megalodon” literally means “giant tooth”), which are today the most common remnants of the Megalodon found.  These teeth didn’t just have powerful jaws helping them to slice through prey, but they also are serrated and deeply planted in the jaw, so as not to break loose or chip when biting even through thick bones of another creature. 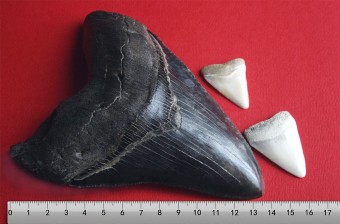 This giant of the sea seems to have traveled far and wide, with their teeth found throughout the globe.  Based on fossil evidence (particularly chewed remains of certain things), its favorite food is thought to have been marine mammals, but it also would eat other things. Among the known things it preferred to eat were dolphins, squids, whales (including very large ones like Sperm Whales), sea lions, porpoises, giant sea turtles, and the like.

So if this was such a big and powerful creature, seemingly the king of the ocean, what happened to the Megalodon?  There are a variety of theories, but mainly it’s thought its extinction came about due primarily to climate change. The Megalodon preferred warmer waters and thanks to global cooling of the Earth’s oceans starting around 15-17 million years ago and culminating into the last Ice Age, the Megalodon died out around the end of the Pliocene era (about 2.5 million years ago).  At this point, the Earth’s global temperature had cooled to just about 2-3° C (3.6-5.4° F) higher than today.

It’s thought this may have simultaneously resulted in a lessening of available warm water breeding sites and a decline in available food supply due to many of the whales it fed on either dying out or moving towards more polar regions where the water was now too cold for the Megalodon. Without an abundance of reasonable sized prey to feed on, the extremely large and voracious Megalodon couldn’t last long.  It’s thought that as food became scarce, the Megalodons even began resorting to cannibalism, and young Megalodons were particularly susceptible, further accelerating their progress towards extinction, which ultimately happened around 1.6-2 million years ago.