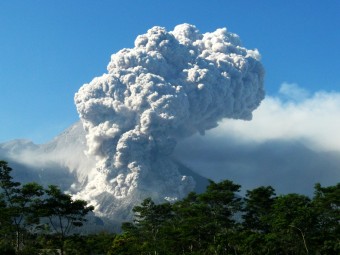 For those who are used to a year with four seasons, imagine how hard it is to believe there could ever be a year where summer never came. In 1816, people living in the Northern Hemisphere did not have to imagine it – they lived it!

“The Year Without a Summer” was primarily the result of the April 10, 1815 eruption of Mount Tambora, which is located on the island of Sumbawa in Indonesia. (Some also attribute some of the environmental effects to extremely low solar activity at that time- the Dalton Minimum.  This was also around the end of the “Little Ice Age”).

This was the largest eruption in 1,630 years at that point (since the Hatepe eruption in AD 180), and was reportedly heard as much as 1600 miles (2600 km) away. The force of the blast obliterated the top third of the mountain and sent 35 cubic miles (145 cubic kilometers) of rock and ash in the air, along with toxic gases. Many residents who survived the blast, the ash cloud and resulting tsunami waves which were as high as 13 feet (4 meters) suffered lung infections as a result of all of the sulfur in the air.

Volcanic ash was found as far away as 810 miles (1300km) from the eruption and was documented to be over 39 inches (100cm) deep in areas within 47 miles (75km) of the blast. The eruptions finally stopped on July 15, 1815 but smoke was still observed billowing from the mountain top as late as August 23 that year. Four years later, in August 1819, rumbling aftershocks and flames were still occasionally being reported.

Crops that were close to the volcano were burned and those covered with volcanic ash were smothered, creating an immediate food shortage in Indonesia. The large amount of volcanic ash and sulfuric acid droplets in the atmosphere blocked the sunlight, resulting in a volcanic winter in the Northern Hemisphere during the spring and summer seasons of 1816. The average global temperatures decreased 0.7 – 1.3°F (0.4 – 0.7 °C) and a persistent “dry fog” described as a “stratospheric sulfate aerosol veil” was observed in the northeastern US.

Typically, the temperatures are relatively stable in the spring and summer seasons in northeastern US and southeastern Canada, ranging from 68°F (20°C) and 77°F (25°C) during the day and rarely falling below 41°F (5°C) at night. Summer snow is extremely rare. However, in May 1816, frost killed off most of the crops that had already been planted in these regions. In Lebanon, New York, temperatures dropped to below freezing almost every day in May. In early June, nearly 12 inches (30cm) of snow fell in Quebec City, Quebec, Canada.

On June 4, 1816 frost was reported in Connecticut. On June 8, 1816 it snowed in Albany, New York and Dennysville, Maine. On June 9, the ground froze solid in Lebanon, New York. On June 12, 1816 the Shakers who lived there had to replant all of their crops that had been destroyed by the cold. In July and August, river ice was observed as far south as Pennsylvania. Berkshire Hills had frost again on August 23, 1916!

This trend continued throughout the Northern hemisphere in 1816 with dramatic temperature swings sometimes from normal or above normal summer temperatures (up to as high as 95°F or 35°C) to near freezing temperatures from one day to the next. This had devastating effects on the crops and transportation. Crop failures resulted in a decrease in local food and supplies such as firewood. Transportation was limited, which made importing goods very difficult and expensive.  As a result of all this, many people could not afford the little food that was available.

Harvests in Britain and Ireland failed due to the cool temperatures and heavy rains. Famine was particularly rampant in Ireland due to the failure of wheat, oats and potato harvests. Food prices rose sharply in Germany and there were riots in many European cities.  Cold and floods killed trees and rice crops in China. The eruption even disrupted China’s monsoon season causing overwhelming floods in the Yangtze Valley in 1816. The delayed monsoon season in India caused late torrential downpours that aggravated the spread of cholera from the River Ganges in Bengal to as far as Moscow. Due to the volcanic ash in the air, Hungary experienced brown snow and Italy experienced red.

The ensuing winter of 1817 was bitterly cold as a result of the eruption of Mount Tambora. For instance, in 1817 in New York, temperatures dropped to as low as -26°F (-32°C) causing New York’s Upper Bay to freeze solid. In eastern Switzerland, the summers of both 1816 and 1817 were so cold that an ice dam formed below a tongue in the Gietro Glacier, high in the Val de Bagnes.

While this eruption and subsequent weather had catastrophic effects on many in the world, there were a few minor historical pluses.  For instance, it is thought by many historians that the resulting famine spurred many tens of thousands of New Englanders, particularly farmers who’d lost everything, to head West and further populate the United States.  Another one, for you literature fans, is that during the summer of 1816, Mary Shelly and John William Polidori were forced to stay indoors with their friends decided it would be a great idea to have a “write-off”, with each person trying to write a more frightening story than the others.  The result of this was Frankenstein (Shelly) and Vampyre (Polidori).