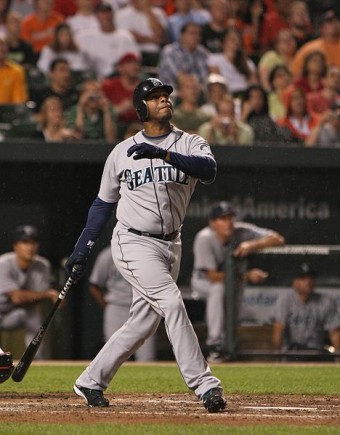 Despite spending the last decade or so of his career often injured, Ken Griffey Jr. was a 13-time All-Star, a 10-time Gold Glove winner, a 7-time Silver Slugger award winner, 1997 MVP,  6th all-time in career home runs with 630, and he accumulated nearly 80 WAR (more on “WAR” in the Bonus Facts below). Any number you look at, it’s clear Ken Griffey Jr., nicknamed “The Kid,”  was one of the greatest players ever to step onto a baseball field. He became a superstar when he was only 19 years old, starting in center field for the Seattle Mariners in 1989. But just because someone is successful, famous, and rich (it’s estimated he made over $150 million during his playing career) doesn’t mean they can’t be sad or, even, depressed. After becoming one of the biggest can’t-miss prospects in baseball history, at the age of 18 the man who would not only be known for that beautiful swing, but also for his infectious and seemingly constant smile, attempted suicide.

Ken Griffey Jr. grew up in a baseball-centric household. His father, Ken Griffey Sr., was a very good Major Leaguer in his own right. A three-time All-Star, Griffey Sr. was probably most well-known for being an integral part of the 1970s Cincinnati Reds, who were nicknamed “The Big Red Machine” and won back to back World Series titles in 1975 and 1976.  “Junior,” as his dad’s teammates came to know the younger Griffey as, was often around the Reds’ clubhouse during these years.

Johnny Bench, the Reds’ Hall of Fame catcher, once said (jokingly) in an ESPN chat that he saw Junior “stealing stuff out of my locker when he was 8.” Despite his apparent closeness with his father, they fought a lot, according to Junior. “It seemed like my father and I were always fighting,” Junior said in a 1992 interview. “I know a lot of kids go through that with their families, but it was hard for me.”  Junior also said that both he and his father were stubborn and intense, both good traits to have as professional athletes, but not always good when it comes to two such people’s personal relationship.

On June 2nd, 1987, the Seattle Mariners made Ken Griffey Jr. the first pick of that year’s baseball amateur draft. Junior was only 17 years old at the time of the draft and was the first son of a Major Leaguer to ever have been drafted first overall. The pressure on Junior was immense. Bob Harrison, a senior scout for the Mariners at the time, wrote in his scouting report that “He’s the best I ever seen…. has all the tools to be a superstar.”

Right away, he dominated the Minor Leagues, putting him on the fast track to the majors. Despite playing well, his personal life was in disarray. He was living away from home for the first time and didn’t know how to be a professional.  “He had no supervision,” said Ken Griffey Sr. in a 1992 interview,  “I had people tell me what he was going through, keeping late hours and all, very late hours.”

In addition, he encountered things he never had to deal with growing up in an affluent household. There was an incident in Bellingham, Washington where he was called racial slurs and was chased with a gun. In addition, he felt like no matter what he did on the field, his coaches were always criticizing him. In every sense, Junior was being forced to become an adult when he was still only “The Kid.” When he came home for his first offseason as a professional ball player, he moved back in with his parents.  Things were not smooth there either. “It seemed like everyone was yelling at me in baseball, then I came home and everyone was yelling at me there,” Griffey recalled in 1992, “I got depressed. I got angry. I didn’t want to live.”

In January 1988, Junior swallowed nearly 300 aspirin  in a suicide attempt, something that could indeed have resulted in his death.  According to Dr. Larry Pedegana, one of the Mariners’ doctors at the time, “ingesting a lot of aspirin will cause metabolic acidosis, which can be fatal.”

Jr. was found covered in vomit in his car by his girlfriend and her brother.  He was rushed to the hospital by his girlfriend’s mother, where his stomach was immediately pumped. He would remain in the intensive care unit at Providence Hospital in Mount Airy, Ohio for several days. Senior later admitted that he was “scared, even angry” at his son for his suicide attempt.  In fact, when Senior came and visited Junior at the hospital, they once again began arguing.  “I ripped the IV out of my arm,” Junior said in the ‘92 interview. “That stopped him yelling.”

Junior got better and his relationship with his father improved. “The problem was with me and my father… There weren’t any deep problems with me afterwards,” Junior stated in a 1992 interview.

Junior was in the Majors the next season, 1989, starting in center field for the Seattle Mariners.  On August 29th, 1990, the Seattle Mariners signed Ken Griffey Senior, at the age of 40, to a contract for the remainder of the season.  Two days later, on August 31st, Junior and Senior became the first father-son combo to play in the same Major League game.

On September 14th, in a game against the California Angels (who ended up winning the game 7-5), Ken Griffey Sr. strode to the plate in the bottom of the 1st and promptly drove a two strike pitch into the stands.  Junior was the next hitter and he waited for three balls before he slammed the next offering out of the park. Junior and Senior had hit back to back home runs, claiming another distinction in baseball history as the only father-son combo to hit back to back homers.

Ken Griffey Jr. retired from baseball during the 2010 season, one of the legends of baseball.  Today, he works for Mariners as a special consultant, working with Minor Leaguers on their defensive skills. He’s also a dad to three children.  None of which would have happened had his suicide attempt been successful.  Junior later stated:

Don’t ever try to commit suicide… Talk to people. Go another way. Don’t kill yourself. It ain’t worth it and I’m a great example…  I am living proof how stupid it is…. No matter how bad it seems at the time, work your way through it. Who knows how your life is going to turn out?