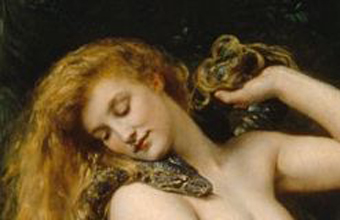 Today I found out that all humans can be traced back to a single female known as Mitochondrial Eve.

This woman is thought to be the “mother” of all humans alive today. Seems like a big claim for scientists to make.  So how do they know this?  The simple explanation is that when an egg is fertilized by a sperm, the DNA from the father and mother join together in a process known as recombination. Certain DNA is only passed down from the mother or father.  All mitochondrial DNA (mtDNA) come exclusively from the mother, as an exact copy. Over time however, there will occur predictable mutations to mtDNA. Biologists can compare samples from individuals to determine how closely they are related- the fewer these predictable mutations, the closer the relationship.  The predictability of these mutations also allows biologists to estimate the time at which a certain mutation (i.e. ancestor) lived.  Beginning in 1987, several studies have been conducted that show all humans alive today have the same female ancestor and she lived approximately 200,000 years ago.

A more detailed explanation is as follows.  Mitochondria are a type of organelle found in almost all complex cells. They are known as the power plants of the cell because they supply an enzyme (more accurately a co-enzyme) known as adenosine triphosphate (ATP). This ATP is the source for the chemical energy needed by a cell to perform a wide range of functions. The DNA found within mitochondria have two benefits. They have 37 genes that rarely mutate, so they can be easily used as the model for an evolutionary clock, and these same genes have subsections that mutate in a predictable manner so biologists can use it as a reference for age.

Sperm have only a few mitochondria (and thus mitochondrial DNA) in their tails. They use them to power their quest to the egg. As the sperm enters the egg, only the chromosomes found in the head of the sperm are preserved and used in the recombination process to create new cells. This is because the rest of the sperm cell is broken down by enzymes within the egg. So the mitochondrial DNA in the tail is lost and the only type to survive is supplied by the mother.

However, there have been a few rare cases in which mitochondrial DNA was found recombined from both parents. Some skeptics of the Mitochondrial Eve theory use this to cast doubt on the hypothesis. This opposition is somewhat dubious as those few cases occur in people who are typically far too biologically deficient  to have offspring. Thus, the prevailing assumption is that these unfortunate people have something seriously wrong with their DNA and the abnormal recombination of mtDNA will never get into the human population because of it.

Even though biologists have shown that all people are descended from one person, this does not mean that only one female was alive at that time. It simply means only one set of genes have been passed down from a single point in history. Most researchers agree that “Eve” was not the only women alive because the fossil record shows much older specimens. From “Java man” at about 800,000 years to “Lucy”, the earliest known remains which are approximately 1-4 million years old.

There are several theories about how just one set of genes could have survived. The most likely is a bottleneck of the human population that would set the stage for an evolutionary “lucky mother”. There have been several possible bottlenecks in history. One report, written in 1998, showed approximately 70,000 years ago humanity was down to around 15,000 people. It showed the reason behind the bottleneck was an ice age that lasted about a 1,000 years.

Other reasons bottlenecks could have happened are: an asteroid impact or volcanic eruption causing drastic climate change; a continuous, widespread plague; or any situation that caused male offspring to have a better chance of survival, leaving relatively few women around to pass on their genes. While no definitive proof exists that these occurred, most researchers believe a combination of one or all of these factors are behind why we all have a common ancestor.