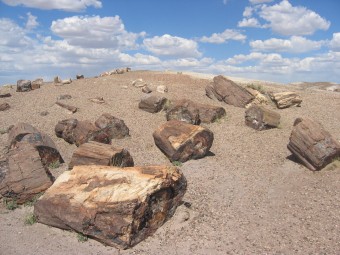 Today I found out how things become petrified, rather than just decaying normally.

Petrifaction (also known as petrification) is a type of fossilization which leaves living organisms preserved as a type of stone. In order for this to happen, a specific set of circumstances has to be present when the organisms cease to live.

When any living thing dies and begins to decay, an oxygen rich environment is usually present. This environment is full of microorganisms, insects and fungi that begin to colonize and break down the organic matter into unrecognizable material. The stuff left over, like cellulose and lignin for trees, or bones and cartilage for animals, is further broken down and has its chemical composition changed by other microorganisms. The end result of this process is the carbon rich organic goodness that award winning gardeners everywhere use as fertilizer.

When an organism dies in an environment that lacks oxygen, for instance if it was covered by ash from a volcano, it is deprived of an environment that is conducive to normal decay. This leads to the organism remaining mostly intact for long periods of time, which in turn encourages the very slow degradation process that allows for the wonder that is petrifaction.

Ground water rich in minerals will start to impregnate all of the pores and cellular spaces inside the organic material. These minerals will crystallize and settle into the shapes of the cells and other structures that are slowly breaking down. When the last remnants of organic material finally changes their chemical composition, all that is left is the stone-like fossil of the original living organism, created by the crystallization of the minerals present. Not all of the organic material is lost, however. Although most petrified plants are rock-like in weight and density, about 1%-15% of the material is still organic.

Wood is one of the most common types of things to become petrified. In fact, there are several known petrified forests throughout the world, including petrified forests in 11 of the 50 states in the U.S. and 19 other countries worldwide. The structure of these petrified fossils depends on the minerals present in the ground water that penetrated the wood. The most common are silica based, as silicate minerals make up about 90 percent of the Earth’s crust and therefore are the most prevalent in groundwater. Some common silica minerals involved in petrifaction include: quartz, calcite, pyrite, siderite (iron carbonate), and apatite (calcium phosphate).

The process of petrifying wood ultimately takes millions of years. For instance, the petrified forest in Arizona is believed to have been created by trees that grew over 225 million years ago. Geologists say that the trees fell in a rain forest almost 100 miles away. Streams containing sediment and volcanic silica ash carried the logs downstream and quickly covered them. The process of petrifaction then began its slow magic. After millions of years, the tectonic uplift that formed the Rocky Mountains, combined with erosion, uncovered these wonders of evolutions wizardry. Currently there is about 100 feet of uncovered petrified trees populating this forest. Every year rainwater exposes additional petrified trees.

A way to quickly petrify wood has been discovered by Dr. Yongsoon Shin and his colleagues from the Department of Energy, at the Pacific Northwest National Laboratory.  Using their method, they can petrify wood in a matter of days. The process starts by taking wood and soaking it in a bath of acid for about a day. Next, it gets soaked in a tub filled with a silica solution. Once air-dried, they bake the wood in argon gas at temperatures of up to 1,400 centigrade for 2 hours. When cooled, the process yields perfectly petrified wood (silicon carbide). It is thought the large surface area created by the vast number of pores in plant material will yield new types of ceramics that will help in filtering processes similar to those that filter out pollutants from different types of gases.

The rare set of circumstances that allow living things to become stone are special indeed. Whether your wood takes millions of years to become hard, or you prefer just several days of manual manipulation, petrifaction is one process that surely excites geologists everywhere!