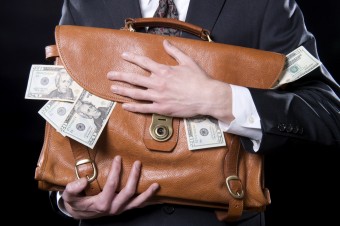 Anyone who’s ever played telephone at camp knows how easy it is for your mind to twist, tweak or completely change what you’ve just heard when you repeat it to someone else. Common throughout history, sometimes when this happens, the adapted quote frequently becomes more popular than the original. Here are just a few examples:

Money is the root of all evil.

Derived from a line found in one of Saint Paul’s letters to Timothy, this misquote significantly omits three important words which changes the meaning of the passage completely. Paul’s original admonition was “For the love of money is the root of all evil.” (1 Timothy 6:10) As you can see, in the original version it is coveting money or greed, not the money itself, that is the root of all evil according to Paul.

Theirs but to do or die!

In his 1854 poem The Charge of the Light Brigade, Alfred, Lord Tennyson penned the famous lines “theirs not to reason why, theirs but to do and die.” Again we see the common misquote completely changes the meaning of the passage. In the original, the charging cavalry know they are likely on a suicide mission into the “valley of Death,”- “to do and die”- but with the misquote, it sounds as if the soldiers believe they can survive the mission, if they only try hard enough- “to do or die”.

This frequently quoted adaptation of a line from William Congreve’s The Mourning Bride (1697) is, to my mind at least, an improvement on the original – both in terms of clarity and brevity. Congreve’s original line was “Heav’n has no rage, like love to hatred turn’d/Nor hell a fury, like a woman scorn’d.” The shortened version focuses on the basic theme of the line – beware betrayed women (see Fatal Attraction, et. al).

Mirror, mirror on the wall, who’s the fairest of them all?

In the 1937 Disney classic, Snow White’s evil stepmother, the Queen, is a self-absorbed psychopath- also a witch. She keeps a magic mirror handy. In asking the famous question, what she really said was “Magic Mirror, on the wall, who is the fairest of them all?” Truly a slight modification. It is notable that in the adapted version, the mirror is just a mirror, but in the original, he is more like a person.

Houston, we have a problem.

On Saturday, April 11, 1970, astronauts Jim Lovell, Jack Swigert and Fred Haise were shot out of Earth’s orbit during the Apollo 13 mission. Two days later, catastrophe struck, and they lost their normal sources of light, water and electricity. Having the right stuff, master of understatement Swigert calmly noted after the explosion and alarms went off, “Houston, we’ve had a problem” (listen here). Of course, with a lot of help from the team in Houston, the crew safely splashed down in the South Pacific on April 17th, though the mission itself was technically a failure in terms of not accomplishing the original goals.

This second adulteration of a line from Congreve’s The Mourning Bride changes the meaning significantly. In the original version, when he wrote “Musick has charms to sooth a savage breast,” Congreve was discussing the power of music to help people manage emotional turmoil. However with the revision and taken out of context, only animals are affected by music, such as when Bugs Bunny plays the violin to stop a feral gorilla from tearing him to pieces.

In Oliver Stone’s classic movie Wall Street (1987), the unscrupulous stockbroker, Gordon Gekko, actually tells the roomful of Teldar Paper stockholders, “The point is ladies and gentlemen that greed, for lack of a better word, is good.” Regardless of how the line was remembered, Michael Douglas’ performance certainly was; he won the Best Actor Oscar for his portrayal of Gecko.

Released in 1942 and starring Humphrey Bogart and Ingrid Bergman, Casablanca still rates as the second best movie of all time (behind Citizen Kane) according to the American Film Institute. Regardless, the oft-repeated line was never uttered in the film. Furthermore, although many attribute the adapted version to Bogart, the closest thing to it comes from Bergman’s character, Ilsa, who says, “play it once Sam. . . play it, Sam.”

There’s a wino down the road.

The only misquoted song on this list is Led Zepplin’s Stairway to Heaven (1971) because before today, I actually thought the mangled version was the correct lyric. The actual lyric is “and as we wind on down the road,” which reminds the listener that this song is about a journey; the misquoted version makes the song seem more like Aqualung.  In any event, Stairway is consistently ranked in the top 100 songs of the 20th century, along with classics like Over the Rainbow, Imagine and Smells Like Teen Spirit. It is also at the top of many “most overplayed songs” lists, as well.

Leo Durocher managed the Brooklyn Dodgers (1939-1948), New York Giants (1948-1955), Chicago Cubs (1966-1972) and Houston Astros (1972-1973). Leo’s famous one liner came while he was coaching the Dodgers. The original quote was actually “Why, they’re the nicest guys in the world! And where are they? In seventh place!”  Were the line never changed, it likely would have soon been lost to history. By shortening it down to its essence, newsmen and baseball fans converted a simple comment on the 1946 Giants into a transcendent statement about the nature of all mankind.