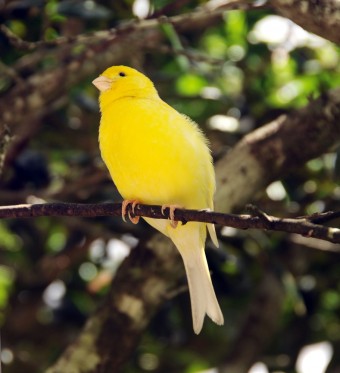 When one hears “Canary Islands” who doesn’t think of a colorful chorus of birds in the local pet shop or that bright yellow soul swinging in the living room? While most of us assume the group of islands off the African coast derive their name from the bird, it turns out it’s the other way around- the birds are named after the Islands, whose name originally had nothing to do with birds, and may actually refer to native island dogs!

Many historians use as a starting point for the origin of the name Pliny’s 1st century account of the islands being populated by large dogs, two of which were presented to Juba, the King of Mauritania, possibly the first discoverer of the Islands. When the Canary Islands were re-discovered by Roman sailors, it was said that one of the Islands was overrun by wild dogs. The entire set of islands was henceforth referred to as “Canaria” (“canis” in Latin means “dog”).

The problem with determining if this “dog” theory is completely accurate is that by the time of the Spanish conquest of the Canary Islands, there wasn’t any sign of dogs. Nevertheless, “Las Islas Canarias” was firmly established when the Spanish colony formed.

Other theories still abounded as to the etymology of “canary” for the name of the island chain. One theory goes that the name refers to an indigenous herb “Canaria” used to purge the bowels of dogs.  In another theory, it’s thought it might be from the name of different plant, “Uva Canaria” (dog’s grape). Yet another theory claims the native Guanches worshiped and even possibly ran wild with dogs and shared their penchant for raw, bloody flesh.

The origins of Canary and the ethnic make-up of its inhabitants are still contested. Part of the problem is that the archipelago of the Canary Islands consists of seven islands, each with its own distinct history: Tenerife, Fuerteventura, Lanzarote, El Hierro, Las Palma, Gran Canario, and La Gomera. What is certain about the Canary Islands is that they are beautiful. The exotic and unusual features of the Islands include golden sands that give way to mountains, active volcanoes surrounded by low clouds, and a variety of landscapes from colorful lush flora to a stark pumice-stone terrain. The pumice formations on Tenerife are so distinctively alien that NASA tests its robots there.

The mystique of the Canary Islands goes back to the early Greeks, who decided they were the location of the Elysian Fields and the gardens of Hesperides. The Romans took up this idea and proposed that the Canary Islands were the Fortunate isles. It’s no surprise then that later in history, some Christians chose to place Paradise itself among its lush islands.

Did we resolve the dog-origin issue? Not really, but the Spanish are proud of their island chain’s supposed canine heritage, however vague its lineage- enough to make dogs a prominent feature of their flag.  What we can say for certain, though, is that the island chain was not named after the birds, but rather, the birds were named after the islands.