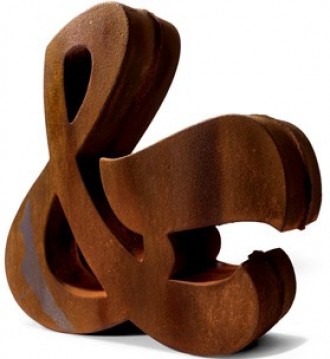 Today I found out where the ampersand symbol and name came from.

The symbol for “&” comes from combination of letters in the Latin for “and”, “et”.  Specifically, in Old Roman cursive, it became common to combine e’s and t’s, which produced something like this:

Over the next six centuries the ampersand gradually became more elaborate until we get the form of the symbol that is used today:

The name for the symbol, “ampersand”, didn’t commonly come into use until the 19th century, from “and per se and”, meaning more or less: “and [the symbol] by itself is and”.  Classically, when the English alphabet was spoken, “per se” commonly preceded any letter of the alphabet that could be used as a word by itself, such as “A” and “I”, as well “O”, which at one point could be used as a standalone word.  Further, the ampersand symbol used to appear at the end of the English alphabet: … X, Y, Z, &. Hence, when spoken: “… X, Y, Z, and per se and”.

By the mid-19th century, this led to the symbol itself officially appearing in English dictionaries as “ampersand”.  The one exception to this being among Scottish people who traditionally call it “epershand”, which derives from “et per se and”, using the original Latin “et” to refer to the symbol when spoken, instead of the English “and”.

This typographical ligature is often falsely credited to famed Roman Marcus Tullius Cicero’s secretary and one time slave, Marcus Tullius Tiro.  Tiro developed a stenographic shorthand system that also included a shorthand version of “et”, which preceded the first known usage of the ampersand by about 100-200 years.  However, Tiro’s symbol was not the combination of “et”, as the ampersand symbol is, and was different in form than the ampersand symbol, being closer to a modern day 7 or, more aptly, was a backwards capital gamma: