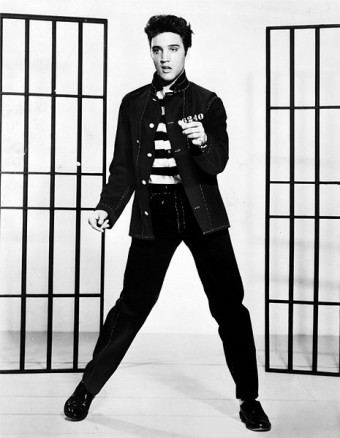 It all happened over half a century ago on January 6, 1957.  One of the more famous, and by today’s viewpoint bizarre, acts of “censorship” in television history.  Elvis Presley was deliberately filmed from the waist up only.

But in the very staid, conservative 1950s, where the world’s top singers were Bing Crosby, Dean Martin, and Perry Como, Elvis came on the scene like a tornado.  The hip-shaking, gyrating kid from Mississippi shook up the showbiz world in a way no one else ever had.

“The Ed Sullivan Show” was America’s #1 favorite family variety show in 1956.  A strange marriage of two colossal forces were soon to meet and become show business legend.  Ed had previously declared he would never have Elvis on the show, but Elvis just got too big and Sullivan had no choice but to recant.

Elvis appeared on the September 9, 1956 Sullivan Show, hosted by Charles Laughton, who referred to Elvis as “Elvin” Presley.  A record audience of 60 million tuned in to watch, which was an 82.5% rating- the biggest TV viewership of a show of all-time at that point.

Elvis also appeared a second time on October 28, 1956. This time his sandy-blondish natural hair was dyed to his “bad boy jet black” shade– the Elvis look we’re all so familiar with.  Both appearances were huge, but the “historic” one was yet to come.

Elvis’ swiveling hips and gyrating body movements had caused a massive stir from these first two appearances, not to mention his concerts and other TV guest shots. TV critics, public school teachers, priests, ministers and terrified parents all railed out against this menace to the world’s youth.

For Elvis’ third and final appearance on the Sullivan Show, it was agreed: he would only be photographed from the waist up! The people in charge of the Ed Sullivan Show must have thought this would make the legions of worried adults feel safer and more secure with “Elvis the Pelvis”, while the kids of America could still enjoy watching even “half” of their sworn idol.

And so, on that fabled night, the King sang his songs and was indeed shot only from the waist up.  Ironically, Elvis’ last chosen song that night was a gospel number.  Yes, Elvis the Pelvis, the King of Rock ‘n Roll, which many at the time felt was the work of the devil, was a religious man and gospel was one of his favorite musical genres.  At the time, he read the bible on a regular basis; he rarely drank, Pepsi reportedly being his drink of choice; and he always addressed his elders as “Sir” and “Ma’am”.  Hmmmm….some menace.

After the legendary show, Sullivan came out and told the TV audience: “This is a real fine boy”, as if trying to reassure the nation’s adult world.  As we watch the black-and-white film clips of the early 1950’s Elvis, the whole thing is quite amusing.  Is this what all the fuss was about?  Elvis’ performance is definitely great, but “shocking”?  Entertaining, interesting, electric- yes. But shocking– ho hum.

I guess it makes us wonder about something else though?  What the heck will the future generation, another half century or so from now, think when they watch films of us and the world we’ve become so accustomed to?  And the way things are going, what will the world be like at that time?