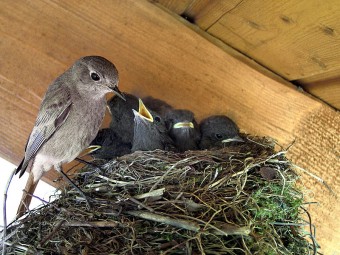 Myth: Handling a baby bird or bird egg will cause the parent birds to reject it.

You’ll often hear this myth stated that if you touch a baby bird, the parents will completely abandon it and it will die. In fact, most birds have a very poor sense of smell, so in most cases are unable to even notice human scent on baby birds (even a skunk’s spray doesn’t seem to bother many types of birds). Not only that, but most types of birds aren’t so quick to abandon their young when they sense danger. Some types will even do their best to defend their young when they are directly threatened, if they can.

In fact, the very few known cases where parent birds sometimes temporarily abandoned their nests from something handling their young, comes from handling the eggs and the parents noticing by sight, not smell. When this happens, the parent birds usually won’t care, other than to be a little more cautious than normal. Occasionally, they may temporarily abandon the nest in order to better observe whether whatever disturbed their nest comes back. But this is all as a result of seeing something, not smelling. Indeed, in most cases, even if the nest is destroyed by wind or something to that effect, you could create a new one and put all the nestlings back in it and the parents wouldn’t care that when they left their baby birds were in a different nest than when they came back; so long as you put the new nest near where the old one was so they can find it.

This myth was probably started by parents who didn’t want their kids handling baby birds (whether out of the nest or not) because of the potential for the kids to hurt the birds and for the potential of the bird’s parents to attack the kids, in some cases. There is also the annoying habit of the kids then bringing the eggs or baby bird home with them, which tends to ultimately doom the bird in question.

Baby birds quite often will leave the nest and walk around before they are fully able to fly (this is very normal), so it is unlikely if you see one on the ground that its location is unknown by the parent birds. In these cases, many types of birds find and identify their young by sound more than anything.

If the bird is a nestling (will appear sparsely feathered and not capable of hopping around), probably best to locate the nest, which should be very close, and put it back. Nestlings should be in the nest, not on the ground. If it’s a fledgling (can hop around and even possibly flit a little), this probably won’t be the only time it falls from the nest or branch the nest is sitting on. You can put it back or not. It will be slightly safer for them in the nest, but many predators, such as cats, don’t find climbing trees to be any problem to get at the baby birds. Also, the fledgling bird is likely just to hop right back out and back down where you found it, so there is little point. At this stage of their life, they are not far away from being able to fly and are commonly found on the ground. In these cases, the parents are likely well aware of where their young are and look after them the best they can in the interim.

So unless you know for a fact that the parent birds are dead, you can choose to either leave the bird there or put it back in the nest. Taking it home to take care of it is a bad idea as there are certain things they need to learn from their parents such as behavior, vocalizations, and survival skills, that you are poorly equipped to teach them. If you know for a fact that the parents are dead, you should contact your wildlife rehabilitator, who will be able to properly care for the birds.