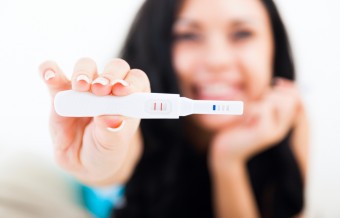 Ah, the pregnancy test. Karla, I can only hope the reason you might be wondering is you’re taking one in a joyous scenario, and you’re trying to have a child, rather than the other way with a little more sweat on your forehead! 😉

Either way, pregnancy tests that use urine samples have shockingly been around since 1350 BC. Yes 1350 BC! (See Bonus Facts below for more information on this ancient, surprisingly accurate test.) However, modern pregnancy tests didn’t began to hit the market until 1978. They rely on an antibody for a hormone known as human chorionic gonadotropin (hCG). If the tests detect the presence of this hormone, they react and give you a positive sign. How does this happen? I’m glad you asked because otherwise this article would have been too short and lacking in detail!

A pregnancy test uses an antibody known as an immunoassay to detect the presence of hCG. The makers of the test then synthesize another antibody and label it with a dye or an agent that produces light as a result of a chemical reaction. They combine these two antibodies based on the “sandwich principal”. When the antibody that binds to hCG attaches to the hormone, the second antibody also attaches and releases its hold on whatever molecule allows for visual recognition. The result is a visual marker that you can see… Science!  Congratulations, you are pregnant.  If the antibody doesn’t attach, the second antibody will not release the visual marker and nothing is seen.  You’re not pregnant.

Once a woman’s placenta begins to secrete hCG, it doubles the amount it produces about every 48 hours. It continues to do this until its peak around the 11th and 12th week of gestation. After this, it begins to decline and then secretes low levels throughout the rest of your pregnancy. This is why most tests (and doctors) tell you to take the test after your first missed period. If you follow this advice, they are between 97-99% accurate.

If you’re worried that your negative test result is not as accurate as the tests done at the doctor’s office, don’t. They’re the same test. The biggest difference is your doctor might perform a blood test to detect hCG as well, rather than or in addition to testing urine. While hCG levels are nearly the same in urine as they are in blood, there are some situations where you can have urine levels of hCG and not have it in the blood. These are the most common reasons for a false positive.  So pee confidently Karla! Modern science has made telling if you are pregnant amazingly accurate and easy.