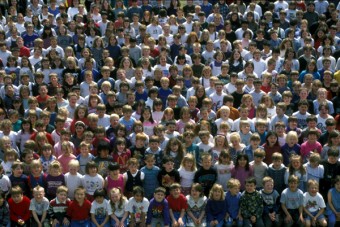 Today I found out that the record for most babies born to one woman is 69.  Yes, you read that correctly 69!

Who was this amazing woman with apparently a womb of steel and a vagina her husband just couldn’t say no too?  We don’t really know. (anti-climactic I know)  Her husband is the one whose name has lived on because of her crazy baby making skills. (Feminists of the world unite!)  She was the first wife of Feodor Vassilyev, a peasant from Shuya, Russia who lived from 1707-1782.   We can only speculate how many fire safety ordinances he violated by housing all his progeny in his little peasant sized hovel.  Presumably, at some point they also had to choose to feed on the weak ones in order to provide food for the strong.

How did she manage this feat given most women only have about 30-ish years of baby making ability?  She gave birth to sixteen pairs of twins, seven sets of triplets, and four sets of quadruplets; so basically a veritable baby making factory who scoffs at “one at a timing” it.  Amazingly, 67 of her children survived infancy, which was a remarkable rate for the day.  No word on whether either of her breasts could say the same.

Now, let’s just take a step back here.  She was the “first wife” of Feodor Vassilyev.  Seeming to imply he married again. (Polygamy was not generally practiced at that time in Russia; so we can assume he was only married to one lady at a time.)  So this guy goes out; shuns wearing tighty whities (presumably); gets married; invests all his money in a baby naming book; then apparently takes every second his wife isn’t pregnant as a personal affront to his manhood; then she presumably kills herself (I mean really, wouldn’t you?) and he then somehow manages to swindle another woman into wanting to be his wife and take on raising his clan?  Can you imagine remembering all 67 of their names?  Especially considering that woman would also need to deal with the fact that many of them came in identical sets.  I don’t know about you, but my parents have to go through every one of my siblings names before they can correctly say mine when they want to get my attention.  That must have taken forever in that family.

Then, of course, after old Feodor Vassilyev swindles her into becoming his second wife, he presumably decided to use her vagina as a clown car too. *shudders*

The really amazing thing of it is that with the 67 surviving kids, if each of them had 2 kids (a low number for back then, but we’ll be conservative here) and each of their kids had 2 kids and so on, and we assume about 25-ish years between generations.  Then this couple currently has around 70,000 descendants!