The Curious Practice of Execution By Golden Shower 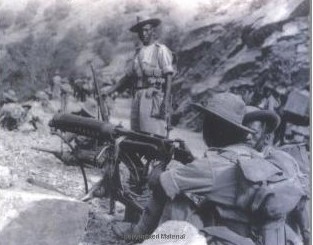 Humans have invented a variety of amazingly cruel and unusual ways to kill or maim one another (often for shockingly arbitrary reasons). And, of course, wars tend to bring out the worst in people; so it’s not surprising that war-time executions can occasionally be among the most bizarre and cruel.   On that note, I was recently reading the first volume of John Masters’ autobiography, Bugles and a Tiger, and came across one of the more bizarre execution methods, death by drowning a person in urine.

This method of execution was used by the Pathans (also known as “ethnic Afghans” and “Pashtuns”).  The women of this group, particularly in the Afridi tribe of the Pashtuns (who today primarily reside in present-day Pakistan and Afghanistan), would occasionally execute people this way, as mentioned by the British John Masters who was stationed in British India when he was 18 in 1933.

…if they [Pathans] captured any soldiers other than Muslims, and especially if the soldiers were Sikhs or British, they would usually castrate and behead them.  Both these operations were frequently done by the women.  Sometimes they would torture prisoners with the death of a thousand cuts, pushing grass and thorns into each wound as it was made.

Sometimes they would peg the prisoner out and, with a stick, force his jaws so wide open that he could not swallow, and then the women would urinate in his open mouth (taking turns) till he drowned.

This kind of cruelty was not confined to war, but was as much a part of the Pathans’ normal lives as were their sturdy independence… If a man suspected his wife of the most minor infidelity, he would cut her nose off… The Pathans punished an adulterer by forcing a thick and knobbly thorn twig down his penis.  They rewarded infringements of lesser laws by tearing a man’s tongue out by the roots.

If that all weren’t cringe-worthy enough:

It is still customary among some tribes in Assam (northeastern region in India)… to punish an unfaithful woman by tying her to a post with her legs apart over a quick-growing kind of bamboo, and leaving her there until the bamboo grows up into her womb and stomach and she dies.

Bizarrely, particularly given their stance on women and adultery, there are also a few reports of these “death by golden shower” executions being preceded by the women first gang raping the condemned man before drowning him in their urine.

Lest you go away thinking that it was just the Pashtuns who instituted various cruel punishments, during these various skirmishes that Masters was involved, he gives an account of a lot of cruelty on both sides.  For instance, in one case a wounded tribesman (both his legs broken) was captured. Contrary to an order given by the commanding officer of this battalion (no prisoners), his soldiers brought him in as a prisoner.  The officer was furious and then “ordered the prisoner to be pegged out, face up, in front of the quarter-guard.  There was no shade and the sun temperature was probably about 130.  The further order was that every man who passed should kick the prisoner in the testicles.”  The prisoner died later that evening and his body was placed in a location where a British soldier had previously been flayed alive by the Pashtuns.