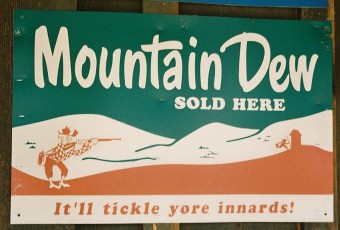 Tristan- If you’re thinking that a 3 pack of condoms costs around $5 and Mountain Dew is only $1.99 for the 2-liter, so why not save yourself $3 on your contraception, think again! Pay the extra money! Mountain Dew does not kill your sperm, lower sperm count, make your penis smaller, or shrivel up your testicles (unless it’s ice cold and placed directly on your testicles, then there might be some temporary shriveling).

I always love a good urban legend. I once got a co-worker to believe coffee shrank his penis. All I needed to do was use a bunch of big words in a meaningful way. (It also helps being a paramedic, as people tend to take your medically protestations more seriously and you have a bigger store of medical terms on hand.  It provides quite a bit of fun, I can tell you.) I made sure to use medical terms he didn’t understand, and BAM! He stopped drinking coffee for weeks. He figured it out a few weeks later and never believed anything I said again. I can only assume this myth came about in a similar way. That being said, I’m never one to just say something without explaining why. Let’s look at Mountain Dew and see why exactly it doesn’t kill sperm.

Mountain dew has numerous ingredients. The two that get mentioned the most in this myth are caffeine and Yellow dye #5, also known as Tartrazine.

Let’s start with caffeine. Mountain dew contains 54mg of caffeine in a 12 oz can.  That might seem like a lot since coke has 34mg per 12 ounces, Dr. Pepper has 41, and Pepsi has 38. If caffeine was truly the cause, drinking coffee would also have to be out. The average cup of drip coffee has 217mg per 12 ounces, about 4 times more than the Mountain Dew! So for comparison’s sake, Mountain Dew doesn’t contain very much caffeine, compared to other things many commonly drink.

The idea that caffeine affects the chances of having a baby is true. There have been several studies that show women who drink 3 or more cups of coffee a day have a decreased chance of becoming pregnant compared to those who don’t drink coffee. Unfortunately, the exact nature of why caffeine affects conception rates is unknown. Because those who drink more caffeine also tend to have unhealthier lifestyles, many of the studies site life style as the reason and not necessarily the caffeine itself.

The idea that caffeine intake affects sperm in some way seems to be dose related. The Chemical Health Hazard Assessment Division of the Canadian Bureau of Chemical Safety (they really need to work on that name!) reviewed  all the current studies on the subject and found that they showed that if a man drank one or two cups of coffee per day, he would have an increase in his sperms motility (the ability to move) and density. If you drank 4 or more cups and also smoked more than 1 pack of cigarettes per day, your sperms motility and density would decrease. The study concluded that only heavy smokers need to worry about drinking too much coffee and sperm problems. The authors went on to say that those sperm problems would most likely not affect fertility.

In the end, it appears you would have to drink about eleven 12 ounce cans of Mountain Dew (or a similar amount of other popular caffeinated soft drinks) and smoke over 20 cigarettes before your sperm would be affected. If you did, that affect wouldn’t cause any fertility issues. At that point, I would worry more about your cancer and diabetes risk, not to mention the effects on your heart and lungs, before I would worry about your sperm.

Now let’s look at the other proposed cause of sperm problems and Mountain Dew- Tartrazine (yellow dye #5). Tartrazine has been used in food, ice creams, drugs, and many other products since 1916. Most all of Tartazine you put in your body will come out in your urine. Very little is actually metabolized by our bodies. The European Food Safety Authority re-evaluated the effects of Tartrazine in 2009. What they found was that there are no adverse effects on reproduction or development from consuming Tartazine. They even tested people at a rate of 1225 mg/kg and still found no adverse effects. So for a 175 pound person that’s 97,443 miligrams! It would be impossible to drink enough Mountain Dew to exceed these levels.

Sperm affects aside, the FDA does recommend that we should only ingest 5 milligrams per kilogram per day of Yellow dye #5. This has nothing to do with reproduction worries, but more about allergic reactions. There is a small percentage of the population that is allergic to Yellow dye number 5 (1/10,000 causes hives according to the FDA). The Center for Science in the Public Interest notes that Tartrazine is found in so many products, from Kraft Macaroni and Cheese and Doritos to shampoos and hand stamps, that the average daily consumption is approximately 12.75mg per day. At these levels, there is still no worries about sperm problems- just allergy ones.

In the end, Mountain Dew will not affect you sperm, testis, or penis size in any way. Should you want to ignore all scientific evidence to the contrary, I suggest you also have your mate stand on her head after copulation. There is no way she could get pregnant then!