Myth: Caffeine will stunt your growth 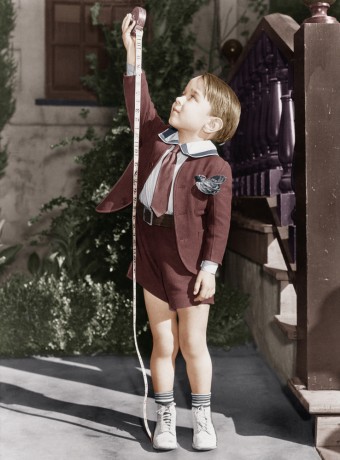 We all remember being 12 years old and seeing your mom guzzling down her 3rd cup of coffee and really wanting some. When we asked if we could have a cup, the response was always the same: “No, caffeine will stunt your growth…” As if being tall was a necessary element in survival! It turns out though, that caffeine will not hinder you growing to NBA-like proportions.

It isn’t known how this old wives’ tale came into societal acceptance. It probably gained some traction with numerous studies showing that drinking caffeine will increase the amount of calcium that gets excreted in your urine. Calcium is a necessary element for bone health. So it isn’t too farfetched to say because of this, adolescents shouldn’t drink it or they might inhibit the ability of their bodies to grow healthy bones. The problem with this idea is that no study to date shows this link.  As you know by now, I’m not one to say anything without solid evidence, so let’s look at how our bones grow, and what, if any, affect caffeine has.

When we’re in the womb, our bones are actually still cartilage. This cartilage doesn’t have any minerals, like calcium, in it. As we develop, calcium and phosphate salts start to accumulate on the cells of the cartilage. The cartilage cells then begin to die off and the minerals are left with pockets in-between them where blood vessels begin to grow. This process is called ossification. After birth, and as we grow, most of the cartilage is turned to bone. The only cartilage left is on the ends of the bone (articular cartilage) where the joints are, and in the growth plates known as Epiphyseal plates.

As we grow, our bones’ cells get absorbed by specialized cells called osteoclasts. Other cells called osteoblasts help build new bone cells. They do this by having collagen fibers on them that help collect calcium and other salt minerals. This process is called remodeling. Several different hormones within our bodies help in this process- Parathyroid hormone, glucocorticoids, Thyroid Hormone, Vitamin D metabolites, Calcitonin, Human Growth Hormone, and Gonadal steroids.

What makes our bones grow longer as we age are the Epiphyseal plates. These areas still consist of cartilage cells (chondrocytes) that can turn into more bone. When we are younger, our bodies have more osteoblasts (bone builders) than osteoclasts (bone absorbers). The result is increasing bone length and size. As we age, our bodies begin to produce more estrogens (yes even in men).  This circulating estrogen causes the growth plates to close and become solid bone. They do this by increasing the rate of apoptosis (cell death) of the chondrocytes.

So the question remains, what role does caffeine play in this process, if any? We know that caffeine will increase the amount of calcium our bodies get rid of. We know that calcium is needed to create new bone cells.

According to the National Academy of Science (NAS), the recommended calcium intake to maintain healthy bones is 1,000-1,200 milligrams per day. One 8 ounce cup of coffee will increase the amount of calcium in your urine by 18.75mg. Meaning, to replace the excess calcium lost by drinking coffee, you would need to add 1 tablespoon of milk to that same cup. The NAS recommends that if you limit your caffeine intake to no more than 300 milligrams and you take in the recommended amount of calcium, you will maintain healthy bones. For reference, that’s 16 ounces of brewed coffee or six 12 ounce cans of the average soft drink.

This is backed up by several studies on the effects of caffeine and bone health, such as a recent study published in the American Journal of Clinical Nutrition which found that the only people who had an increase in bone loss due to caffeine intake were woman age 65-77 who had a variation in their vitamin D receptors. They found, if these women drank more than 300 milligrams of caffeine per day over a three year period, they would be at greater risk of osteoporosis. The only other people who showed abnormal bone loss due to caffeine were elderly people who didn’t get the recommended amount of calcium in their diets.

Young people had no decrease in bone loss from caffeine intake, even if they didn’t get the recommended amount of calcium in their diets. A National Institute of Health study concluded that the amount of exercise the average young person gets, compared to the elderly, was most likely the reason. Exercise causes micro fractures within the bones that increase bone metabolism. The result is healthier bones. This was backed up by another study that followed 81 adolescents over 6 years. Even those who drank the highest levels of caffeine had no difference in bone density or growth, compared to those who had no caffeine.

So when your 14 year old asks if he can have a sip of your Venti Caramel Macchiato, rest assured that it won’t hinder his growth. It might, however, get him hooked on the most addictive legal drug known to man. No worries though, we can’t all be perfect parents!