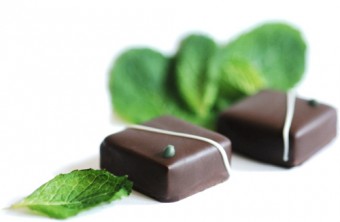 Today I found out why mint tastes cold.

Similar to why peppers taste hot, what’s going on here is there is a chemical in mint, menthol, which is tricking the brain into thinking that the area the menthol is applied to is cold; even though in fact, it’s the same as it was before.  More specifically,  menthol binds with cold-sensitive receptors in your skin; these receptors contain things called “ion channels”, in this case TRPM8.  The menthol makes these much more sensitive than normal, so they trigger and you feel a cold sensation, even though everything is more or less the same temperature as before.

This extra sensitivity is why when you eat peppermint, which has a relatively high level of menthol, and then you breathe in deeply through your mouth, your mouth feels extra cold.  Your cold receptors are reacting much more strongly than they normally would to the air which is cooler than the inside of your mouth.

Menthol is a compound classically obtained from various mint plants, though now is often synthetically produced due to the extreme high demand for menthol in a variety of products.  Menthol is a waxy, crystalline substance that is somewhat clear or white.  Interestingly, it is actually solid at room temperature and melts just a few degrees above room temperature.

Now for an experiment: Take a Jalapeno pepper and an Altoids Peppermint and eat them at the same time.  What happens?  … Seriously, someone want to try this and report back?  Given that the capsaicin in peppers and the menthol in mint are both effectively fooling the brain into perceiving hot and cold using similar ion channels, despite no actual change in physical temperature, it would seem like that the two may well cancel one another out in the brain (how can one feel hot and cold coming from more or less the same receptors?); or at the least, one would think it would produce a very unique sensation.  So do they cancel each other out or does one win-out over the other?