Was One of the Bond Girls Really Formerly a Man?

December 13, 2012 Daven Hiskey
Brenda asks: Did one of the Bond girls really used to be a man? 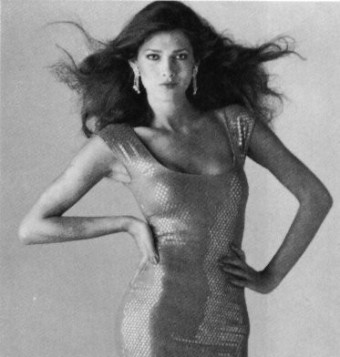 You see, the woman in question, actress and model Caroline Cossey, born Barry Kenneth Cossey, was born with something known as Klinefelter Syndrome, which means she has an XXY chromosome pattern with 47 chromosomes, instead of 46.  This is a condition that occurs in about 1 in every 500-1000 male births (and significantly more rarely occurs in females).  This makes it one of the most common chromosome abnormalities known to man.

Some of the common side effects of this are low testosterone levels compared to most males, wider hips, less muscle mass, possible breasts (in about 1/3 of the cases), generally infertile, and significantly less body and facial hair, among other things.

Now, traditionally those with Klinefelter Syndrome have been called “XXY males”, to distinguish them from “normal” XY males.  However, in the International Journal of Andrology published in 2011,various researchers from several Australian medical institutes proposed in a paper,  Thinking Outside the Square: Considering Gender in Klinefelter Syndrome, that some XXY “males” should actually be called XXY “females” and others simply intersex.

The specific point of the paper was that perhaps Klinefelter Syndrome should be detached from “XXY”. Most with this condition are clearly male and identify as such, but a small percentage seem to be female, and thus typical treatment for Klinefelter Syndrome, including being given testosterone starting during puberty, may be damaging psychologically as it would make the person’s body more male-like, when in fact they were female.  As these treatments preferably start at a very young age, the child may not be in a position to assert this one way or the other.  (In another study, there was even a case where the researchers came across a rare XXY female (born with a vagina), who since childhood had always thought of herself as a male and demonstrated stereotypical male-like tendencies from the beginning.) 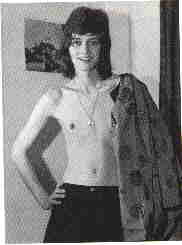 Barry Cossey at the age of 16 before beginning hormone treatment.

While Cossey was indeed born with a penis, throughout her youth she was extremely feminine in personality, looks, and personal preference tendencies, which often resulted in her getting bullied at school.  She was also frequently mistaken for a girl by those who didn’t know her. (You can see in the picture to the right just how feminine she looked as a teen.)  From this, if you buy into the medical researchers’ argument proposed in their paper, we’d perhaps say that Cossey was one of those XXY’ers who, while born with a penis, was actually an XXY female.

In her late teens, after dropping out of school and working a few odd jobs, she became friends with a transsexual and at that point, at the age of 17, started hormone therapy.  She also started working as a showgirl and later, after breast surgery, as a topless dancer.  Once she’d saved up enough to be able to pay for sex reassignment surgery, she had that done too with her final surgery in 1974.

She started modeling before her reassignment surgery and continued under the name “Tula” after with a lot of success, appearing in numerous magazines, including some adult magazines where she’d pose topless.  She later even appeared in a 1981 edition of Playboy.  She also would have started a role as a model in a game show in 1978, but she quit the show when a journalist discovered she was born with a penis and was going to break the story.

Unfortunately, her career was severely stunted from this as she had to try to keep a low profile to keep her secret from being published.  This all ended in 1981 when she appeared in the Bond, For Your Eyes Only, film and the story broke, for a time being front page news.  The aftermath of this was initially devastating to Cossey who was sure her career as a model was over, but eventually she moved on and continued modeling, as well as writing two autobiographies, the second of which, My Story was written in 1992.  She’s today married to Canadian David Finch; the two recently celebrated their 20th anniversary.