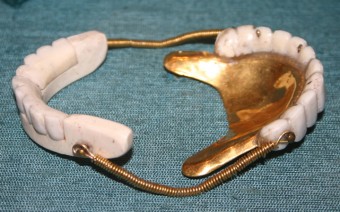 George Washington never had wooden teeth. Washington lost most of his teeth at a relatively young age and opted for dentures made by Dr. John Greenwood (maybe where the “wooden” teeth came from: “Greenwood teeth?”) In any event, they were carved from ivory and also contained quite a bit of gold and some lead. Human and animal (horse and donkey) teeth were then riveted to the gold and ivory and the whole thing was set in place by a spring mechanism. This spring mechanism actually made it so Washington had to constantly hold his mouth shut with his jaw muscles, which is why he probably always looked so stern in portraits. In early models of his dentures, the false teeth would be hooked to his remaining real teeth with metal wires. Eventually, he lost all his teeth and the dentures relied completely on the spring mechanism to stay in place.

Washington actually had pretty meticulous dental hygiene for his time, including brushing his teeth daily and using mouthwash and a tongue scraper. However, he also suffered from constant toothaches and frequently took calomel (mercurous chloride) which can lead to destruction of the teeth. He also, like many of his day, used substances that were very abrasive to clean his mouth, which probably also led to the decay of his tooth enamel. So by a combination of that and probably having naturally bad teeth, this led to him losing his teeth steadily from the age of 22 until 55, when he officially had lost them all. Indeed, by his inauguration in 1789, he had only one natural tooth remaining, which I like to imagine he called “old chomper”.