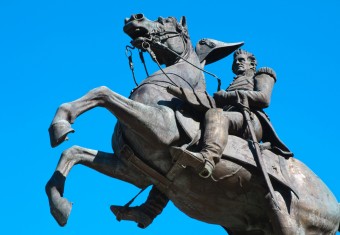 On this day in history, 1835, Richard Lawrence became the first known person to attempt to assassinate a U.S. President, attempting to fire two guns at Andrew Jackson at close range.  His assassination attempt failed only because the guns he pointed at Jackson jammed when he pulled the trigger.  Interestingly, when the guns were later tested by police, they proved to be quite reliable, which caused many at the time to believe it was divine intervention that saved the President.

Richard Lawrence was a painter who, at the time of the assassination attempt believed himself to be King Richard III of England (in fact, Richard III, the last King of the House of York, died some 350 years before at the Battle of Bosworth Field, which is regarded by many historians as marking the end of the Middle Ages; this battle also is considered by many to have brought to a close the Wars of the Roses).

In any event, around the time of the assassination attempt, Lawrence found himself out of work, something he blamed President Jackson for, rather than his own insanity. He further thought that the U.S. government owed him a significant amount of money and if he could just kill Jackson, then it would be paid to him.  He also felt that money would become plentiful in the U.S. as a result of Jackson’s death.  Once he had his money, he planned to return to England where he would take back his throne, as King Richard III.

The actual assassination attempt took place after a funeral that Jackson attended, that of Warren R. Davis, a former Representative from South Carolina.  When Jackson was leaving the funeral, Lawrence stepped out from behind a pillar he was hiding behind, pointed his Derringer gun at Jackson from around 13 feet away and pulled the trigger.  Reports state the fire arm went off, but the bullet did not leave the chamber. He then quickly discarded the first Derringer and drew out his second and pulled the trigger, this time with Jackson just a few feet away.  This second shot reportedly went off like the first, with a loud bang, but with no bullet exiting the chamber.

Jackson didn’t take kindly to this assassination attempt and subsequently attacked Lawrence with a cane. Others around Jackson helped subdue Lawrence, including Congressman Davey Crocket, who incidentally was a staunch political enemy of Jackson, but nevertheless saw fit to help him take down Lawrence.  Some reports even state that Jackson had to ultimately be pulled away from Lawrence as he continued to beat him even when Lawrence was down and completely subdued.

Lawrence was subsequently tried, though not convicted, by virtue of his insanity.  He was then placed in a variety of asylums for the remainder of his life, dying 26 years later in 1861.

Conspiracy theorists at the time felt that Lawrence’s assassination attempt was actually not Lawrence’s idea, but was instigated by certain of Jackson’s political opponents, including Senator George Poindexter, who had hired Lawrence to paint his home just a few months before the attempt on Jackson’s life.  Indeed, enough people thought Poindexter was involved in the assassination attempt that many of his own supporters withdrew their support and he was unable to get re-elected.  Jackson himself thought Senator John C. Calhoun was the main person behind the attempt.

Jackson not only was the first known U.S. President someone tried to murder, but also is thought to be the first to be physically attacked while in office.  The attacker was Robert B. Randolph and the attack happened about two years before the assassination attempt.  Randolph had been in the Navy but Jackson had him dismissed.  Randolph later attacked the President, striking him and then running away when people around Jackson attempted to grab him.  Randolph ended up getting away with striking the President scot-free as Jackson didn’t press charges.