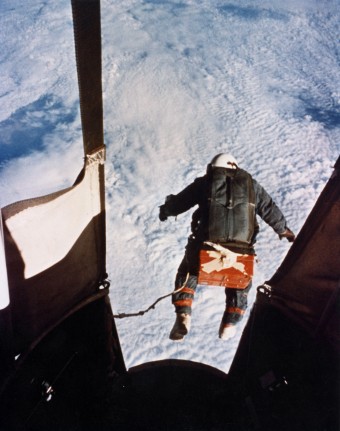 Myth: The instant you’re exposed to the near vacuum of space, you’ll lose consciousness, your blood will start to boil, and you’ll explode. (Other variations on this myth include you freezing near instantly from the extreme “cold” of space.)

In fact, so long as you don’t try to hold your breath, which would result in your lungs rupturing and thus pretty well guaranteed that the incident will be fatal, you’ll likely remain conscious for about 10-15 seconds.  After that, you’ll be fine as long as you’re placed back  in a pressurized environment within about 90 seconds.  It’s even possible that some might be able to survive as much as 3 minutes, as chimpanzees are capable of this without lasting detrimental effect.

These numbers are based on both human accidents that have occurred and on experiments run on animals.  For instance, in 1965, researchers at the Brooks Air Force Base in Texas ran a series of experiments on man’s best friend, dogs (dog lovers out there, prepare to be enraged).  They exposed the dogs to a near vacuum (1/380th normal atmospheric pressure) for varying amounts of time to see how the animals’ bodies would react. In most cases, the dogs survived without permanent damage, so long as the time frame was less than 90 seconds.  Once they pushed it to two minutes, the dogs suffered cardiac arrest and died.

During the experiments, the dogs became unconscious after 10-20 seconds.  They also experienced simultaneous urination, projectile vomiting, and defecation, the latter two caused by gas from their digestive tract being rapidly expelled.  Many of the dogs also experienced dramatic seizures.  Some of the dogs ended up with a thin layer of ice on their tongues as the moisture in their mouths evaporated, cooling the tongue rapidly.   Finally, the dogs’ bodies themselves swelled to nearly twice their normal size, so that they looked like “an inflated goatskin bag”.

You might think from this that there would be no way their bodies could recover from this, but in fact, as long as atmospheric pressure was restored before that 90 second mark (while the dog’s heart was still beating), they all survived with no apparent lasting damage.  The immediate after effect was simply that they were not able to walk for about 10-15 minutes after normal atmospheric pressure was restored.  A few more minutes later and their eyesight returned.  Beyond that, the dogs were apparently fine.

So that’s dogs.  What about humans?  Chimpanzees were chosen here as the guinea pigs.  They did much better than the dogs, with most able to survive for up to 3 minutes, with the record being 3.5 minutes.  For those under 3 minutes, they not only were fine, but the researchers were able to confirm that their cognitive abilities, with one exception, were not damaged in any way.

We don’t just need to rely on animal tests though. Enough depressurization accidents have happened over the years for us to see that the typical Hollywood version of things isn’t at all accurate.  One of the first such accidents was when a technician at the Johnson Space Center in 1965 accidentally depressurized his suit by ripping out a hose.  Around the 15 second mark, other technicians started the process of re-pressurizing the chamber, but the process took long enough to get a brief glimpse of how a human would perform in that situation.  Specifically, he remained conscious for 14 seconds.  During this time, he remembered feeling the water rapidly evaporating off his tongue.  He regained consciousness at around the 15,000 ft. atmospheric pressure level, which was about 27 seconds into the ordeal.  The only residual effect noted was that he couldn’t taste anything for several days after the accident, though his sense of taste returned back to normal within a week.

In another accident, the person involved wasn’t so lucky.  In his case, it took about 3 minutes to re-pressurize the chamber he was in.  Once it was re-pressurized, the man gasped a few times, then ceased to breathe and no amount of manual artificial respiration could get him breathing again.  So it would appear the 3 minute mark is just a little bit too long.

A worse incident, in that it included three people instead of one, occurred during the Soyuz-11 mission in 1971.   During the crew’s decent back to Earth, 12 small explosives that were supposed to fire one at a time to detach the orbital module from the service module ended up firing all at once.  The result of this was that the pressure equalization valve, whose function is to equalize the inside pressure of the capsule to the outside when atmospheric pressure reaches appropriate levels, opened and allowed air to escape from the module as they descended from orbit (beginning to lose pressure at 104 miles up).

The three crew members instantly knew what had happened and Viktor Patsayev, being the only one close enough to do anything about it, attempted to close the valve manually.  This takes 60 seconds to accomplish and it took 30 seconds for the cabin to completely depressurize (at about the 15 second mark the crew would have only had about 10-15 seconds of useful consciousness).  Despite all this, Patsayev almost managed to fix the problem, managing to close the valve half way before passing out.

The three men were exposed to the near vacuum of space for approximately 11 minutes and 30 seconds.  The capsule landed without the recovery crew aware that there was anything wrong.  When they opened the hatch, they found all three cosmonauts appearing as if they were asleep, showing no real tissue damage at first glance.  It wasn’t until they looked closer at them that they noticed some tissue damage, though not any more severe than what often occurs during explosive decompression, despite the extended time in a vacuum.

So now that we have a pretty good idea of roughly how long you could last if your full body was exposed to a near perfect vacuum, what would happen if just one part of your body was exposed to the near vacuum of space, say your hand if you’re trying to plug a hole in your space ship with it?  We can actually answer that question because of an equipment malfunction during Joe Kittinger’s record leap from about 19.5 miles up on August 16, 1960.  During his ascent, the following happened:

At 43,000 feet, I find out [what can go wrong]. My right hand does not feel normal. I examine the pressure glove; its air bladder is not inflating. The prospect of exposing the hand to the near-vacuum of peak altitude causes me some concern. From my previous experiences, I know that the hand will swell, lose most of its circulation, and cause extreme pain…. I decide to continue the ascent, without notifying ground control of my difficulty… Circulation has almost stopped in my unpressurized right hand, which feels stiff and painful… [Upon landing] Dick looks at the swollen hand with concern. Three hours later the swelling disappeared with no ill effect.

His total ascent took 1 hour and 31 minutes, he stayed at the peak altitude for 12 minutes, and his total decent took 13 minutes and 45 seconds, so his hand was exposed to a near vacuum for quite some time without long term ill effects.

So to sum up, if exposed to the near vacuum of space, as long as you don’t try to hold your breath or impeded its decompression, you’d:

tagged with biology facts, how long can you survive in space, human body facts, myths, science facts, Space facts, surviving in a vacuum