Why Did People Once Think the Moon was Made Out of Cheese?

October 4, 2012 Daven Hiskey
Ron asks: Why did people think the Moon was made out of green cheese? 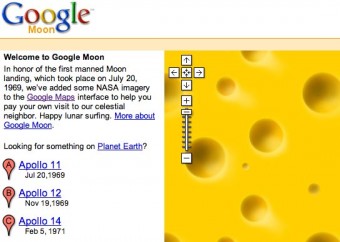 In the early days of Google Moon, when you zoomed into the Moon, it eventually showed a Swiss cheese surface

Because it was formed in the Milky Way… *crickets*

So other than lunatics and children who were told so by their parents via fables, nobody seriously ever thought the Moon was made of cheese.

Another common misconception surrounding the Moon/green cheese thing is that the “green” here is referring to the color green.  While there are actually green cheeses, what the “green” signifies here is “new” or “fresh”, so “the Moon is made of new cheese.”  This was a common way to refer to cheese where the whey either hadn’t yet all been pressed out or had just been removed from the curds, in other words, cheese that has not been aged at all.

So how did this “Moon is made of green cheese” thing all start and become popularized?  It isn’t entirely clear who was the first to come up with the expression, but it became extremely common starting in the mid-16th century. The credit for the person to come up with the expression usually goes to famed French monk and scholar François Rabelais or English writer John Heywood.

Ye fetch circumquaques to make me believe,
Or thinke, that the moone is made of greene cheese.
And when ye have made me a lout in all these,
It seemeth ye would make me goe to bed at noone.

So basically, the expression itself simply was used to refer to something so ludicrous that only the extremely gullible would believe it.

Another early example using the statement in the same way can be found in 1565 in Shacklock’s Hatched of Heresies:

Whilst they tell for truthe Luther his lowde lyes, so that they may make theyr blinde brotherhode and the ignorant sort beleve that the mone is made of grene chese

Yet another early reference from John Wilkins’ New World Book 1 (1638), which is explicitly clear as to the meaning of the expression and that it had become common,

While in the early days it was used just to signify gullibility, in the last couple centuries many started thinking that people actually used to believe this, which is kind of ironic if you think about it.  This is not unlike how people started believing that most thought the world was flat during the Middle Ages, when in truth in many parts of the world people have known the world wasn’t flat for well over 2000 years.

For instance, Eratosthenes (at the time the head librarian at the library of Alexandria) around 240 BC not only knew the Earth was round, as most Greek scholars did at the time, but managed to become the first known person to calculate the circumference of the Earth accurately, only off by about 2%.  He also calculated the distance from the Earth to the Sun and was off by only about a half a percent.  Not only that, but he calculated the tilt of the Earth on its axis and was off by less than half a degree.  Another amazing accomplishment by Eratosthenes was that he basically invented the discipline of Geography with his remarkable three book treaties Geographikia.  You can learn more about all this here: The Amazing Eratosthenes