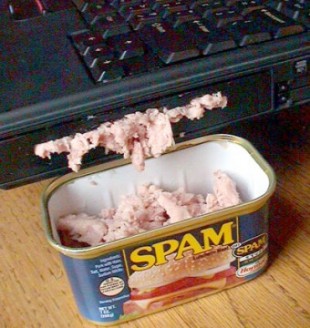 Today I found out how the word “spam” came to mean “junk message” or “junk mail”.

While some have suggested that this was because SPAM (as in the Hormel meat product) is sometimes satirized as “fake meat”, thus spam messages are “fake messages”, this potential origin, while plausible enough on the surface, turns out to be not correct at all.

Exactly where this first translated to internet messages of varying type, such as chat messages, newsgroups, etc, isn’t entirely known as it sort of happened all over the place in a very short span of years, in terms of the name being applied to these messages.  It is, however, well documented that the users in each of these first instances chose the word “spam” referring to the 1970 Monty Python sketch where SPAM singing was drowning out conversation and SPAM itself was unwanted and popping up all over the menu.

Some examples of these first instances of unsolicited/unwanted messages being referred to as spam: