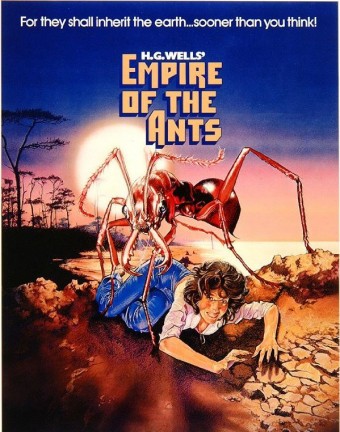 Today I found out where the expression “I for one welcome our new X overlords” came from.

For those not familiar with this now popular funny meme, the basic idea is to substitute X with any perceived extremely powerful entity that it would be futile to resist. A somewhat recent example of this can be seen when Ken Jennings, after losing to IBM’s Watson on Jeopardy! in 2011, wrote underneath his Final Jeopardy answer “I for one welcome our new computer overlords.”

While you’ll often read that this was originally a line spoken by actress Joan Collins in the 1977 film Empire of the Ants, this isn’t correct.  Nowhere in this movie does any actor or actress say that line. (As I was reading conflicting accounts of this from reputable sources, I confirmed it is not spoken in this movie by watching the whole amazing awful, yet surprisingly unintentionally humorous horror film where “A heavenly paradise becomes a hellish nightmare when a toxic spill turns harmless ants into gigantic rampaging monster insects.” )

The closest thing to this statement anyone says in the film is after Joan Collin’s character Marilyn Fryser (a scammer trying to sell worthless swampland as beach front property to prospective clients) enters into an enclosed space with the queen ant.  The queen then sprays her with a mind controlling pheromones.  When Fryser went into the chamber, she was screaming and trying to escape.  When she stepped out, she looks back at the rest of her party, who are also seemingly about to be put into the chamber, and says,

Don’t you see, we mustn’t’ disobey them.  We must take care of them and we must help them.

While the line “I for one welcome…” was never spoken in the film,  when the authors of this line came up with it, they were alluding to Empire of the Ants’ plot of giant ants enslaving humanity to work in sugar factories.

The first instance of this phrase can be found in the 1994, season 5 episode of The Simpsons, Deep Space Homer.  In this episode, Homer is selected by NASA to be sent into space.  While in the space shuttle floating around trying to eat potato chips before they “clog the instrument panels”, Homer smashes into the ant colony on board, breaking the glass and releasing all the ants.

When one of the floating ants gets close to the camera, it makes it look extremely large, prompting Simpsons’ anchorman Kent Brockman to think it is a giant ant.  He then states the following:

Ladies and gentlemen, uh, we’ve just lost the picture, but what we’ve seen speaks for itself. The Corvair spacecraft has apparently been taken over — ‘conquered’ if you will — by a master race of giant space ants.

It’s difficult to tell from this vantage point whether they will consume the captive Earth men or merely enslave them.  One thing is for certain: there is no stopping them. The ants will soon be here.

And I for one welcome our new insect overlords. I’d like to remind them that as a trusted TV personality, I can be helpful in rounding up others to toil in their underground sugar caves.