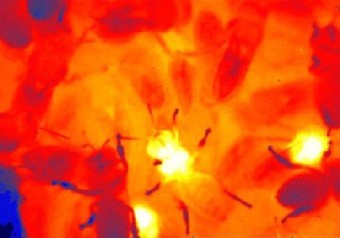 Today I found out how Honey bees keep their hives warm even though they are cold blooded.

Up until only a few years ago, it was thought by many scientists that Honey bee hives were kept warm by pupae in the brood and that the bees would often congregate there to warm themselves up from the pupae.  Recently, this was found not to be the case when a new Honey bee job was discovered, that of “heater bees.”  Bees of almost all ages can perform this function by either vibrating their abdomens or they can also decouple their wings from their muscles, allowing them to vigorously use these muscles without actually moving their wings.  This can heat their bodies up to about 111° Fahrenheit (44° C), which is about 16° F (9° C) hotter than their normal body temperature. 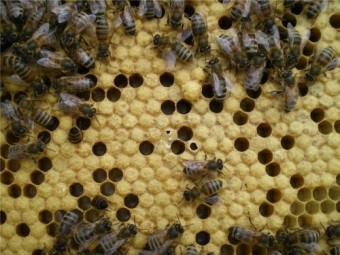 Normally, Honey bee jobs are primarily “assigned” based on their age (see 10 Amazzzzing Honey Bee Facts for more on this).  However, if the hive needs more bees that are naturally inclined towards house keeping jobs or foraging, the heater bees can adjust the temperature of certain cells to accommodate this.  Raising the temperature of a cell to 95° F (35° C) rather than the normal cell temperature of about 93° F (34° C) will produce bees that are more inclined to prefer foraging jobs, over housekeeping ones, and vice-versa; so they’ll be more reluctant or more eager to change jobs than other bees their age, depending on their former cell temperature.  This helps make sure that the needs of the colony can always be met given the current state of the hive and environment.

During winter, the bees all clump together towards the middle of the hive, surrounding the queen.  At this time, they allow the temperature of the hive to drop to around 81° F (27° C) on the inside of the cluster to conserve energy. Bees on the outer parts of the cluster, which will usually be around 48° F (9° C), then occasionally rotate with the bees on the more crowded inner parts, so that all the bees can keep warm enough to survive. Once the queen starts laying again, the temperature of the inner part of the hive will be raised back up to about 93° F (34° C).