How a Firefly Glows 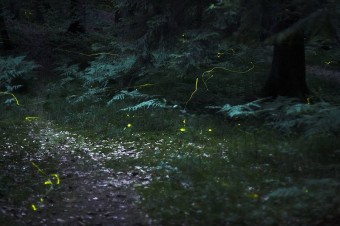 Today I found out how a firefly glows.

The glow from a firefly comes from the lower part of their abdomen. This “lantern” portion has an evolutionary gift in the form of bioluminescence. The light produced by a small layer of cells called photocytes is reflected off several layers of reflective cells and emits a greenish-yellow glow.

Specifically, inside the light producing cells within the firefly is an organelle called a peroxizome. The chemical party that lies within it is what creates the light. Magnesium and ATP combine with an enzyme known as luciferase and the protein luciferin. This combination creates a very excited molecule. When oxygen is introduced into the mix, the molecule goes from “excited” back to a steady state. Think of having to pee extremely badly. You begin to tap dance like Micheal Flatley on crack! Once relieved, you return to a “steady state”. In the case of a photocytes chemical reaction, this energy release is in the form of a photon of light.

The mechanism that turns on and off this light show is still the topic of some debate. The prevailing theory revolves around the firefly’s ability to control oxygen within photocytes. Mitochondria (the organelle that controls ATP production) require large amounts of oxygen. When the firefly decides to light up the sky, it signals “trigger cells” around their air tubes to produce large amounts of nitric oxide. When the mitochondria inside the photocytes become soaked with nitric oxide, it results in extra oxygen available within the cell. It is thought this extra oxygen availability kicks off the chain reaction that produces light.

The process involved in stopping the luminous chemical reaction within photocytes has also yet to be proven. Researchers have found that white light can reverse the effects of nitric oxide on a key respiratory enzyme found in mitochondria. Because of this, it is thought that the “off” button on a firefly could be light itself.

The reason for this evolutionarily driven light show is mating. Fireflies, like most animals that procreate sexually, need to find a way to attract potential suitors. In the case of the firefly, this attraction is accomplished with flashes of visible light.  When a hot-to-trot male is ready to put on his Barry White and begin patrolling a specific area for females, he will start his flash-dance in the hopes of being seen by a willing lady. The females usually sit in wait, and once an attractive male happens by that gets her fire going, so to speak, she will signal back. The male also prepares a “nuptial gift” in the form of sperm wrapped in a high protein package, which he then gives to her and the mating ritual of this bright beetle is soon accomplished.