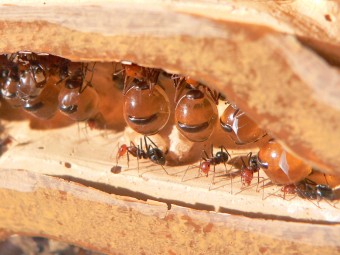 Today I found out some ants are used as living food storage vessels by their colony.

While honey bees will collect and store their food in combs, certain species of ants take a different route, using the bodies of some of their fellow ants, often the larger bodied ants of the colony called “majors”, to store what they need. Worker ants bring the “honey” or “honeypot” ants things like nectar, water, body fluids and fats (from prey such as caterpillars and termites) to store in case of drought or other times where resources are scarce.  Depending on the size of the colony, there may even be thousands of these honeypot ants in a single nest, doing nothing but sitting there and waiting for their stored sustenance to be needed.

As the other worker ants bring the liquid foods to the honeypot ants, their gasters (rear portion of the ant) will swell larger and larger until they become so big they can’t move around.  This isn’t that big of a deal for them as they also tend to become so big that they wouldn’t be able to leave the nest anyways as the paths out are too small.  These honeypot worker ants can even swell to as large as a small grape.

In order to retrieve food from the honeypot ants, other worker ants will stroke the antennae of the living storage vessels.  When this happens, the honeypot ant will regurgitate a little of the sweet liquid it has stored in its abdomen for the worker to eat or distribute elsewhere, such as feeding the queen.

Given the fact that honeypot ants contain such a rich source of tasty liquids inside themselves, they tend to be sought out by predators, even humans.  As such, they usually are “stored” deep within the nest to protect them.  Nevertheless, Honey Badgers and other such predators will seek out these swollen ants and eat them when they find them.  Some Native American tribes, as well as Aborigines, were also known to regularly harvest honeypot ants, biting off the swollen abdomen for a sweet treat.

Most species of ants actually have the ability to do something similar to honeypot ants.  Specifically, they have two stomachs, one for their own use, and one for storing food for the colony’s use. This second stomach is capable of swelling a bit to hold liquids for transport back to the nest.  Once back, they can then regurgitate this liquid for other ants in the nest to consume.  With honeypot ants, their storage organ is simply capable of expanding to a much larger volume than what is possible in most other types of ants.