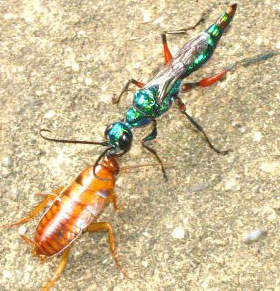 Today I found out that the Jewel Wasp, also known as the “Emerald Cockroach Wasp”, is a parasitic wasp that injects various mind controlling toxins into a cockroach’s brain then leads the roach back to its burrow where its hatched larva ultimately slowly eat the still living cockroach’s body from the inside out.  So basically, a lot like my brother’s ex-girlfriend.

Specifically, the Wasp starts by stinging the cockroach around its midsection.  This temporarily paralyzes the roach’s front legs.  Now that the roach’s ability to move is slightly inhibited, the wasp makes a much more precise sting, injecting its venom into the part of the roach’s brain that controls its ability to initiate walking.

The venom injected into a specific part of the brain of the cockroach doesn’t actually affect the general motor skills of the roach.  At this point, it’s perfectly capable of fleeing, if it could be motivated to do so.  The problem is that the venom actually seems to inhibit the cockroaches desire to flee from potential danger and even pain, specifically by inhibiting the ability of the cockroach to begin complex behaviors, such as walking.  The venom does this by blocking a specific neurotransmitter called “octopamine”. Once they are coerced into moving, they can walk just fine, though they have trouble forcing their body to continue to move.

In any event, once the wasp has injected its venom into the correct part of the cockroach’s brain, the wasp is free to lead the roach back to a burrow by gently pulling on the antennae like a leash, which provides enough external stimulus to coax the zombiefied cockroach to walk, so long as the wasp continues to tug and guide it. Once in the burrow, the magic happens.  The wasp lays an egg on the roach’s abdomen.  It then exits the burrow and blocks up the hole.   The roach then sits around in the burrow seemingly without a care in the world.

About three days later, which is coincidentally about the same time the venom will begin to wear off, a little larva is hatched and proceeds to feed on the delectable roach.  But the fun doesn’t stop here.  The larva doesn’t actually eat all the roach right away.  No, the roach is still quite alive when the baby wasp chews into its abdomen and proceeds to live there as a parasite.  Over the next week or so, the larva eats the roach’s internal organs generally in such an order that the roach will stay alive for quite some time (four or five days).  Once the larva has eaten all the innards of the roach and the roach dies, it then forms a cocoon inside the cockroach’s body from which a full grown wasp eventually emerges.