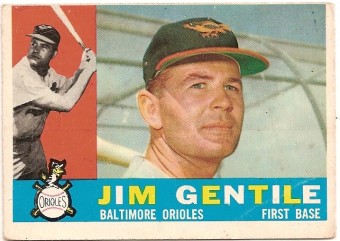 Yesterday Josh Hamilton tied an MLB record with 15 other players, hitting four home runs in one game.  Something even more rare happened on this day in history, Baltimore Orioles first basemen, ‘Diamond’ Jim Gentile, managed to hit a grand slam in two consecutive innings (the 1st and the 2nd inning, both home runs estimated at 410 ft), becoming the first player in history to manage this feat, on his way to a monster year. In that year, Gentile’s second full season in the big leagues, he hit .302 with a .423 on base percentage, mashed 46 home runs and drove in 141 runs, by far the best season of his career, though he was a solid all-around player for the majority of his career.  That 1961 seasons he also managed 5 total grand slams, a record that would stand for 26 years until Don Mattingly would hit 6 in 1987, oddly the only grand slams Mattingly hit his entire illustrious career.

These MVP caliber numbers for Gentile ended up not being good enough for the award that year; Gentile finished third.  Why?  Well, if you know your baseball history, that was the year Roger Maris and Mickey Mantle chased the Babe’s single season home run record, with Maris ultimately passing it, hitting 61 home runs. Mantle fell short with 54 home runs.  Maris ended up winning the MVP, though in truth Mantle arguably had the best year of the three, hitting .317 with a .448 on base percentage and worth 11.1 WAR (wins above replacement), compared to Gentile’s 8.6 WAR and Maris’ 7.9 WAR.  However, you break one of the most important records in baseball, held by a  legend and once thought an unbreakable record, and that gives you a bit of a boost in the MVP voting I suppose.

Since Gentile’s two consecutive slams,  five other players besides himself have hit grand slams in back to back innings:  Jim Northrup (1968), Frank Robinson (1970), Robin Ventura (1995), Bill Mueller (2003), and Josh Willingham (2009).  However, one player did something a little bit more impressive and rare when it comes to grand slams, Fernando Tatis on April 23, 1999 managed two grand slams in the same inning, both off of Chan Ho Park.

It should also be noted that you’ll sometimes read that Jim Tabor in 1939 managed grand slams in back to back innings, becoming the ‘real’ first to do this, but in fact he did not  *looks at Wikipedia disapprovingly*.  While he did hit two grand slams in the second game of the doubleheader on July 4, 1939, he did not do so in back to back innings, rather in the 3rd and 6th innings.  In addition to those two slams, he hit a solo shot in that game.  Further, in the first game that day, he also hit a home run, giving him a total of 6 hits with 4 home runs, 1 double, and 1 walk on the day.  Talk about being in the zone.  The Red Sox scored a total of 35 runs that day vs. the Athletics’ 19.  Not a good day for the pitchers apparently.