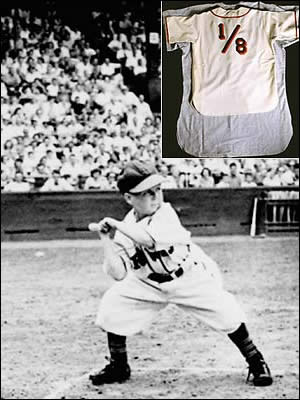 Today I found out there once was a little person who played in Major League Baseball.

This man was 26 year old, 3 feet, 7 inch tall Eddie Gaedel.  Gaedel was signed by Bill Veeck to a Major League contract of $15,400 ($100 per game), which was the set minimum one could pay a little person performance act, per event. Gaedel was an evenly proportioned dwarf (the term for such a person at the time was “midget”, with dwarfs who were disproportionate in some way being called just dwarfs).

When Veeck began scheming ideas to bolster attendance for his newly acquired, struggling team, the St. Louis Browns, he specifically requested a midget as it was more socially acceptable in that era where dwarfs were unfortunately often relegated only to the “back stage” or freak shows. Further, Veeck felt a midget would look more athletic in the uniform over other dwarfs.

After reviewing several candidates, he settled on Eddie Gaedel, who already was something of a showman, appearing in circuses, rodeos, and the like, and was a member of the American Guild of Variety Artists.  He also held more common jobs like being an errand boy for a newspaper and during WWII he worked as a riveter.  His small size particularly suited him for this job as he was able to crawl into places on the planes that most workers couldn’t fit into.

Veeck anticipated that Major League Baseball would be against this signing, so submitted the contract for review late on a Friday, which would result in it getting approved without anyone looking at it too thoroughly.

On Sunday August 19, 1951 before the second game of a double header against the Detroit Tigers, Veeck had Eddie Gaedel pop out of a papier-mâché cake and announce to the crowd of 18,369 that he was the newest member of the St. Louis Browns.  Initially people thought Gaedel being a member of the team was a joke and that he would not actually be playing.

When he stepped up to the plate  to lead off in the second game of the double header that day, to pinch hit for Frank Saucier, at first the umpire, Eddie Hurley, wasn’t going to allow him to bat.  However, Veeck showed the umpire Gaedel’s signed contract and the official roster for the team and he was allowed to lead off.

Veeck had given Gaedel specific orders that he was not to swing.  Further, he was to crouch low in his batting stance to minimize the size of the strike zone (in this crouch, the strike zone was estimated to be just a few inches).  Gaedel did not do the practiced crouch in the actual game.  Rather, he stood up a bit more, so the zone was a little larger than it would have been, but still quite small.

Veeck’s  plan worked and Gaedel managed an easy walk.  With the first two pitches, the opposing pitcher, Bob Cain, did try to throw a strike, but finding this too difficult, he just lobbed the ball for the next two pitches.  Gaedel then took his base, stopping to take a bow twice on his way, and was lifted for a pinch runner, Jim Delsing.  As he walked off the field, Gaedel was given a boisterous standing ovation.

Two days later, American League President Will Harridge voided Gaedel’s contract and he was out of a job.  Further, Harridge officially banned midgets from being able to play in the American League and removed Gaedel’s walk from the official records (it was put back in a year later). After this was announced, Gaedel complained in the media that Harridge had just robbed him of what would have been a lucrative baseball career.

Veeck responded to the banning of midgets from the American League with, “Fine. Let’s establish what a midget is in fact. Is it 3 feet 6 inches? Eddie’s height? Is it 4 feet 6 inches? If it’s 5 feet 6 inches, that’s great. We can get rid of [MVP] Rizzuto.”  Veeck even threatened to request MLB officially rule on whether Phil Rizzuto qualified as a midget or not. (Future Hall of Famer Phil Rizzuto was officially listed at 5 ft, 6 inches, but that’s “baseball inches” which aren’t always too accurate, especially with shorter players whose height numbers tend to get padded.)

Despite the public show, Gaedel hadn’t expected to get to serve out the whole contract and he even waved his normal right to 30 days of severance pay, which would have been about $3000 ($25,000 today).  This had always been more of just a one day gig for Gaedel.  However, had Major League Baseball by some miracle approved the contract, Veeck had planned to have Gaedel used regularly in such situations as when the bases were loaded and a walk would force in a run.

Gaedel ultimately did get a lot more than just $100 out of this performance.  He cashed in on his new-found fame, booking a variety of appearances including TV and radio spots and even playing in an amateur game (striking out in that appearance). All total, it’s estimated he earned over $17,000 ($140,000 today) in the few weeks following his Major League at bat alone. However, it wasn’t all sunshine lollipops for him after this.  Due to the extreme discrimination against little people at the time and that his fame  tended to result in a lot more attention (often negative) than he otherwise might have received, he understandably developed something of a temper with people who made fun of him for his stature.  He also began to drink heavily, which compounded the problem, where he’d become combative even when no offense was intended.

This all came to a head on June 18, 1961.  Gaedel got drunk at a bowling alley and apparently got in verbal confrontations with several people before leaving.  Whether as a result of this or that he simply got mugged, at some point between the bowling alley and arriving home, he was beaten up on his way home.  His mother found him the next morning in bed, dead.  He had been having heart problems and the beating he took exacerbated the issue, resulting in a fatal heart attack.  He was just 36 years old.