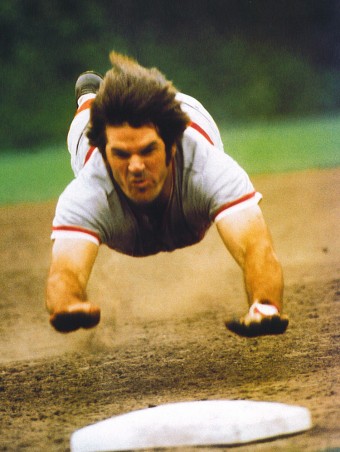 However, according to Mickey Mantle, that wasn’t the first time Ford called him that.  Rather, it was in a spring training game where Mickey Mantle hit a home run way out of the ballpark; rather than just watch it sail overhead, Rose ran to the wall and jumped as high as he could to try to catch the ball that was long gone.  Mantle stated that when he got back to the dugout, Ford said “Did you see Charlie Hustle out there?”

In any event, that hustle paid off as Rose went on to win the Rookie of the Year award that year, batting .272 with a .334 OBP while tallying 170 hits.  From there, he went on to compile one of the most impressive “counting stat” careers in the history of the game, finishing his career as a player: first in hits (4256); first in games played (3562); first in runs scored by a switch hitter (2165); most doubles by a switch hitter (746); most singles (3215); most walks by a switch hitter (1566); most total bases by a switch hitter (5752); most consecutive seasons with 100 or more hits (23); and tied for most years with 200 hits (10, tied with Ichiro Suzuki who did it consecutively, unlike Rose, and just missed making it 11 straight in 2011 by 16 hits).  In addition to those, Rose also added to his trophy case: three batting titles; one MVP; 17 All-Star game selections; and two Gold Glove awards.

He also went on to manage, starting in 1984 while he was still a player and continuing on to 1989, with the latter three years of that as just a manager and not a player/manager.  He eventually was placed on the permanently ineligible list in 1989 due to a gambling problem, including betting on Reds games, the team he was managing.  In exchange for voluntarily being placed on that list, Major League Baseball agreed to not formally reveal their findings on his gambling habits.  However, it is known that he bet on at least 52 Reds games between 1986 and 1987, though there was never any evidence that he bet against the Reds.  Despite numerous appeals, Rose has remained on that list to date and is barred from the Hall of Fame because of it.

Interestingly, Mickey Mantle was also once put on the permanently ineligible list for being associated with gambling.  In his case, though, he wasn’t the one doing the gambling.  Rather, he was working at a casino in Atlantic City in 1983 as a greeter and representative, primarily in golfing charity events.  The commissioner of baseball, Bowie Kuhn, when he found out Mantle worked at the casino warned him that he would be banned from baseball if he didn’t quit.  When Mantle ignored his warnings, the commissioner followed through on his threat and placed him on the permanently ineligible list.   When Kuhn was replaced by Peter Ueberroth, Mantle was reinstated and allowed to participate in MLB activities again starting in 1985.