On June 26, 1975, professional gambler Barney Curley pulled off one of the most famous betting coups in all of sports. With careful planning and skillful execution, Curley and his compatriots won just over IR£300,000 (or about $2.6 million today) on the “slow but steady” mostly unknown horse named Yellow Sam. Curley’s father, Charlie, had been a grocer before sinking […]

END_OF_DOCUMENT_TOKEN_TO_BE_REPLACED

Mitchell asks: Why is home plate shaped different than other bases? Oftentimes the most exciting part of a baseball game is the competition between the pitcher and the batter. The pitcher stares down the batter as he adjusts his grip on the ball and prepares for the most perfect pitch his arm can throw; the batter returns the pitcher’s glare […]

END_OF_DOCUMENT_TOKEN_TO_BE_REPLACED

While David Belle is unquestionably known as the original innovator and spiritual figurehead of parkour, the discipline’s origins can be traced directly back to his father, Raymond, and his time as a child in Vietnam. Though details surrounding Raymond’s early life are rather hazy, it’s generally accepted that he was separated from his parents during the First Indochina War and taken in […]

END_OF_DOCUMENT_TOKEN_TO_BE_REPLACED

Falling under the category of “What could go wrong?” is the sport of ferret legging. Simple in its design although painful to master, the sport simply requires a man, a pair of baggy trousers and two live ferrets. The trousers are secured at the ankles, and, after the ferrets are set free in them, secured at the waist as well. […]

END_OF_DOCUMENT_TOKEN_TO_BE_REPLACED

Bert Trautmann was born October 22, 1923 in Bremen, Germany. Blue-eyed and blond haired, Trautmann was the product of a tumultuous political climate within the post-World War I country. He grew up surrounded by Nazi-ideology, including blaming the Jews for the country’s economic problems and believing certain Germans, such as himself, were members of the “master race.” So it’s not […]

END_OF_DOCUMENT_TOKEN_TO_BE_REPLACED

Jared H. asks: Why do we call medicine balls that when they’re just round weights? Medicine balls, for those of you who haven’t been to a gym or never accidentally kicked one thinking it was like a soccer ball (true story), are heavy weighted balls coming in a variety of sizes and weights (with the biggest we could find ringing […]

END_OF_DOCUMENT_TOKEN_TO_BE_REPLACED

Wrestling for honor and victory can be traced back to a least 4000 years ago, to the ancient civilization of Mesopotamia. The first great work of literature, The Epic of Gilgamesh, was written around 2100 BCE. In it, the two main characters Gilgamesh, king of Uruk, and Enkidu, who was sent by the gods to challenge Gilgamesh over his appalling abuse […]

END_OF_DOCUMENT_TOKEN_TO_BE_REPLACED

It is undisputed that Josh Gibson was the greatest position player in Negro League history. He could field, throw, catch, and most of all, he could hit. His power was legendary. It was claimed by Chicago American Giants infielder Jack Marshall that Gibson hit a ball out of Yankee Stadium in 1934, in the history of the stadium the only player […]

END_OF_DOCUMENT_TOKEN_TO_BE_REPLACED

This is the time of year when millions of Americans are being stricken with March Madness (See: How March Got So Mad). Over a hundred teams (both men’s and women’s) are competing against one another for the right to be called a champion. This is a goal that all of these collegiate athletes work towards and most would never give […]

END_OF_DOCUMENT_TOKEN_TO_BE_REPLACED

Birds chirping, Sun shining, temperatures warming, and the smacking of a baseball hitting a glove – ah, the sights and sounds of spring. Okay, maybe up north and on the east coast, they are still digging out from the latest snowstorm, but those signs of the changing season aren’t far away. On the west coast and down south, the annual […]

END_OF_DOCUMENT_TOKEN_TO_BE_REPLACED

Denny G. asks: Why do baseball managers wear the team’s uniform instead of a suit or something like that like you see in other sports? It especially seems weird because managers in baseball seem to universally let themselves go after their playing days are over and tubby old men do not look good in sports uniforms! Football coaches wear clothes […]

END_OF_DOCUMENT_TOKEN_TO_BE_REPLACED 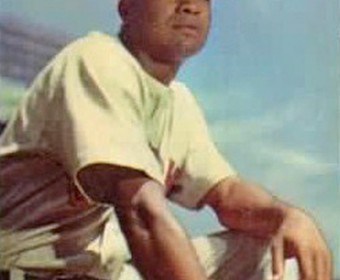 On April 15, 1947 in Brooklyn, New York, the great Jackie Robinson broke the color barrier and became the first African-American in 67 years to play in the Major Leagues. (Yes, Robinson was not the first, as is often stated.) Less than three months later, on July 5, 1947 in Cleveland, Ohio, Larry Doby became the second African-American ball player […]

END_OF_DOCUMENT_TOKEN_TO_BE_REPLACED

Michael R. asks: Where did the football saying hut… hut… HIKE! come from? An integral part of the game, immediately prior to the start of play, the football quarterback begins his cadence. More than just “hut,” the offensive leader on the field uses short commands to prepare the team, adjust to the defense’s line up and even change the play. […]

END_OF_DOCUMENT_TOKEN_TO_BE_REPLACED

John B. asks: Why are things like the distance and height of a pitchers mound always uniform, but outfield dimensions are allowed to be whatever the stadium designers want? From Boston’s Green Monster, to San Francisco’s McCovey Cove and Houston’s absurd Tal’s Hill, Major League Ballparks can vary greatly in design and depth. Yet despite all of their differences, the […]

END_OF_DOCUMENT_TOKEN_TO_BE_REPLACED

Kevin A. asks: I was just wondering how Felix Hernandez became known as “King”? The religious Abraham was commanded by God to leave his homeland and travel to a distant, already occupied, place in which Abraham would eventually rule with the aid of divine blessing. Maybe it was fate that Felix Abraham Hernandez, born in Venezuela, would come to baseball’s […]

END_OF_DOCUMENT_TOKEN_TO_BE_REPLACED

There is a long-standing belief that golf was invented by the Scottish, sometime in the 14th or 15th centuries. This maybe false, at least according to Chinese professors and the Hong Kong Heritage Museum. In 2006, evidence was presented that the game may have originated from the ancient Chinese game “Chuiwan” – loosely translated to “hitting ball.” Two paintings, one […]