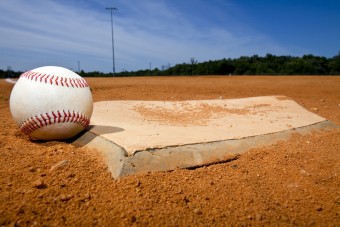 Birds chirping, Sun shining, temperatures warming, and the smacking of a baseball hitting a glove – ah, the sights and sounds of spring. Okay, maybe up north and on the east coast, they are still digging out from the latest snowstorm, but those signs of the changing season aren’t far away. On the west coast and down south, the annual tradition of baseball’s spring training has already commenced. But when was the first spring training? When and why was it decided that Florida and Arizona would be the hubs? What’s the history behind baseball’s yearly rite of passage, spring training?

The first instance of a baseball team going south to train likely was the New York Mutuals in 1869. The New York Mutuals were established in 1857 as an amateur ball team and were named after the Mutual Hook and Ladder Company Number 1, where many of the players were volunteer firemen. Additionally, many of the players (if not all) were city officials and had political affiliations with the notorious Tammany Hall. This explains why one of the team’s major financial backers was Tammany Hall leader and the most powerful man in New York, William “Boss” Tweed.

With the financial and political help of Boss Tweed, the Mutuals recruited the best players (by paying “under the table”) and turned them into a baseball powerhouse. Thus, the Mutuals soon were no longer necessarily an amateur team, with every player on the city payroll. To further get an edge, Tweed wanted his team to train more. So, in 1869, he organized for the New York City Council to approve giving fifteen hundred dollars to the team to go to New Orleans to train during the winter. As a show of support to New York’s ball team, Tweed himself threw in seventy five hundred dollars, bringing their total to nine grand (in today’s dollars, around $157,734) for one winter trip south. Despite this, it seems as if their training trip didn’t help much – the Mutuals ended up losing more games during the 1869 season than in any other of their previous eleven seasons. Perhaps that nine thousand dollars went towards other things besides baseball.

A year later, in 1870, the Chicago White Stockings and the Cincinnati Red Stockings followed suit by also going to New Orleans to not only train and hold organized baseball camps, but to play a few “exhibition games” as well. As for the Red Stockings, this came on the heels of them becoming the first official professional baseball team in 1869. Baseball pioneer Harry Wright was the team’s owner, manager, and starting center fielder who came up with the idea that paying players would attract the best talent (potentially, also where Tweed got his idea). Because of this, when all was said and done, the team only had one player actually from Cincinnati. They even defeated the New York Mutuals in their last game of the season (in November) by the reported score of 17 to 8. The Red Stockings went undefeated that first season in 1869 and only lost six games in 1870. But once their undefeated streak ended, the crowds dwindled and, due to this, the team folded after the 1870 season.

Throughout the 1870s & 1880s, other teams went south to take advantage of the warmer weather for training purposes. While New Orleans was the most popular destination, Savannah and Charleston were also cities that hosted baseball teams. A believer in spring training, Harry Wright, who by 1884 was the Philadelphia Quakers (or the “Phillies” -the team was referred to as both) manager, was approached by a Florida town about training in their sunshine filled state. Wright turned them down due to accommodations being too expensive and, instead, took his team to Savannah.

Another legend associated with spring training comes from the bombastic and media savvy Baseball Hall of Famer Cap Anson. In the middle of a typical 1885 Chicago February snowstorm, White Stockings player-manager (and a mighty fine hitter at that) Anson found himself in a bar when he spotted one of his pitchers waltzing in wearing a too-tight vest from “living the winter good life.” The pitcher downed several beers, in plain sight of his manager. It was supposedly at that moment that Anson decided to take his players to Hot Springs, Arkansas (the hot springs were believed to have medicinal value). First, though, he had to get permission from his owner, Albert Spalding (yes, of Spalding sporting goods fame, who helped get the myth of Abner Doubleday inventing baseball established). Spalding enthusiastically supported this idea and would later tell a newspaper reporter,

I have written to a professor down there, and he is making arrangements to build a vat in which he can boil the whole nine at once… I boil out all the alcoholic microbes, which may have impregnated the systems of these men during the winter while they have been away from me and Anson… If that doesn’t work, I’ll send ‘em to Paris next year and have ‘em inoculated by Pasteur.

The Washington Capitals became the first team to train in Florida, making Jacksonville their spring home in 1888. This was the furthest South a northern professional baseball team had ever traveled to train. Traveling for two days from Washington to Jacksonville in a Pullman, players were forced two to a bunk. When they finally arrived, the players weren’t in the best state for baseball. Said a then relatively unknown light-hitting catcher by the name of Connie Mack (and soon-to-be Hall of Fame manager) about their spring training experience,

When we arrived in Jacksonville, four of our 14 players were reasonably sober. The rest were totally drunk. There was a fight every night, and the boys broke up a lot of furniture. We played exhibition games by day and drank much of the night.

In fact, the team was turned away from several hotels due to their behavior and for, quite simply, being ballplayers. Again saying Mack, “the manager (of the hotel) was horror stricken to find out we were ballplayers.” Needless to say, northern baseball players, perhaps deservedly, didn’t have a great reputation down south. As it turned out, the Jacksonville trip didn’t do any good for the Capitals during the season either. They finished a whoping thirty seven and half games out of first place. Spring training baseball didn’t return to Florida for fifteen years.

Though the Cactus League and spring training in Arizona happened significantly later than in Florida, around World War II, it was as early as the turn of the century when teams made their way out west for spring. The Chicago Cubs was the first, calling sunny Southern California their home in the spring of 1903. On March 11th, the Cubs took up residence at a ballpark near downtown Los Angeles (on Washington and Grand, for those LA natives). They stayed only two weeks, but earned the admiration of a Los Angeles Times reporter who wrote, “There are no bright and shining stars in the team, for all of them scintillate. While the team will remain here but two weeks, the practice in these warm days will do wonders in getting the men into condition.”

In 1905, the Cubs remained in SoCal, but this time they trained in a ballpark in the beach town of Santa Monica. For several years after, other teams would find Los Angeles an amicable spring home, including the New York Giants, the Chicago White Sox, and the Boston Red Sox. The Cubs returned in 1917, thanks to their new owner – chewing gum mogul William Wrigley. They spent that year’s spring in Pasadena, and a mere few block walk from Wrigley’s new mansion on Orange Grove Avenue. In 1922, Wrigley moved his team to tropical Catalina Island – 30 miles off the coast of Long Beach – where they practiced and played exhibition games in an exact replica of their field in Chicago.

There were several factors involved in spring training making its way to Arizona during the 1940s. During the war, baseball commissioner Kennesaw Mountain Landis established the “Potomac Line,” which stopped teams from going beyond the Mississippi River. This was due to the need for trains to be available to carry troops, supplies, and other wartime necessities. After the war, teams were again allowed to venture west, but the time that passed had allowed industrious owners to consider new spring training locations, like the creative Cleveland Indians owner Bill Veeck. Veeck owned a ranch near Tucson, Arizona. In 1947, Veeck decided he liked the idea of his team training near his home, but wanted another team to join him. So, he called up the owner of the New York Giants, Horace Stoneham, to try to convince him as well. Said Stoneham later,

I’d heard Veeck was shopping around because the Indians weren’t drawing many people in Clearwater, and one thing Bill can’t stand is no customers around. Well, you know Veeck. He wanted to know when the next plane was leaving for Arizona. I told him he could train in Phoenix and we’d take Tucson. Bill, after giving me a big okay, called the next day. “I’m a little slow,” he said. “It just came to me that I have a ranch near Tucson. How about a switch? Me, Tucson, you, Phoenix?”