August 25, 2015 Samantha
Mitchell asks: Why is home plate shaped different than other bases? 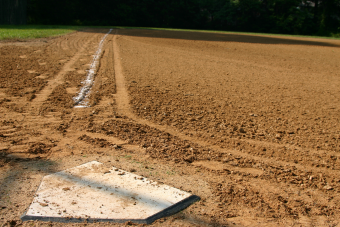 Oftentimes the most exciting part of a baseball game is the competition between the pitcher and the batter. The pitcher stares down the batter as he adjusts his grip on the ball and prepares for the most perfect pitch his arm can throw; the batter returns the pitcher’s glare as he holds the bat loose in his hands and anticipates his hit. In the early years, rules surrounding pitchers and hitters were loose at best. But as the game progressed, so did the rules.

Pertinent to the topic at hand, home base went through three major shape changes over the years.

To begin with, prior to 1899, the rules regarding home plate were extremely loose. Any object round in nature could serve as home base. During this time when shape was what mattered most, the circular object used could be made of marble, stone, glass(!), or any other materials. At times, even a dish served as home base, which some think may have led to the alternate name–home plate.

In 1899/1900, the rule regarding home plate’s shape changed, requiring the base to be square in shape, as opposed to circular, so it matched the rest of the bases. The 12″ x 12″ square (later to become a 16″ x 16″ square) was positioned so one corner pointed toward the pitcher and the opposite corner pointed toward the catcher. As a result, the inner and outer edges of the strike zone were determined by the other two corners of the base.

In addition, this now square base was made out of stone or marble, with edges occasionally sharp enough to slice skin. (Not surprisingly, sliding into home plate didn’t become popular until after rubber was adopted as the standard material for home base.)  If all this wasn’t bad enough, it wasn’t that many years before this that catchers did not wear any sort of glove when receiving pitches. (See: The Real First African American to Play in the Major Leagues) Rough sport.

This brings us to the irregular pentagon shape of home base that we know and love today. This was developed by Robert Keating and introduced as a viable option for the 1900/1901 baseball season. The rear corners, which extend to a point, are made to be perpendicular to the first and third base lines. The biggest advantage of the new shape was that it made the edges of the strike zone more visible to pitchers and umpires and, therefore, improved the consistency of calling strikes.

Beyond the shape, although rubber had been occasionally used prior to this, the new design specifically required home plate be made of rubber. Keating’s reasons for picking rubber here were that the springy nature of a rubber base would give base runners a bounce to their step when they took off for first base; it would not harshly vibrate the batter’s hands when he struck the base with the end of his bat; and it would prevent severe injuries from occurring when base runners slid into home.

So, in the end, home base is primarily shaped differently than the other bases because its purpose is different. Whereas other bases are used primarily for base runners, home plate has an added use in being essential in determining the strike zone.