April 21, 2015 Karl Smallwood
Jared H. asks: Why do we call medicine balls that when they’re just round weights? 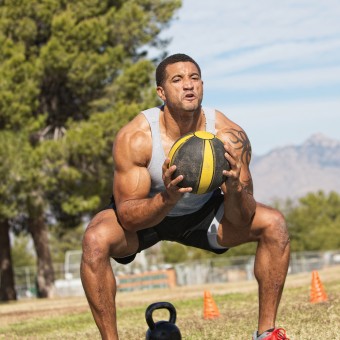 Medicine balls, for those of you who haven’t been to a gym or never accidentally kicked one thinking it was like a soccer ball (true story), are heavy weighted balls coming in a variety of sizes and weights (with the biggest we could find ringing in at a whopping 150 pounds) with a diverse range of fitness applications. But why exactly are they called medicine balls when, at its core, a medicine ball is just a big heavy ball?

For starters, medicine balls are noted to be one of the most diverse pieces of exercise equipment one can own, useful for toning almost every part of the body, and are also extensively used in various forms of physical therapy.

While details are sparse on the history of medicine balls, we can reliably track their usage back around 3000 years, where they were used by Persian wrestlers looking to become stronger. In Ancient Greece, Hippocrates considered them to be an essential tool for helping injured people regain mobility and he advised people to use them as a general, all purpose way of remaining healthy.

This all brings us back to the origin of the name. The word “medicine” was long synonymous with the word “health”. For example, it’s noted that Renaissance physician Hieronymus Mercurialis advised that people of all fitness levels should use what we would recognise as medicine balls in his book De Arte Gymnastica, as part of what he called “medicinal gymnastics“. The use of the word “medicinal” in this case was to highlight how the exercises could be used as both a way of healing injuries and preventing them in the first place through general fitness.

Although devices we would recognise as being medicine balls have been commonplace for millennia, the word itself is only a few hundred years old, being attributed to one, Professor Roberts way back in 1889. According to a Scientific American article from the time, Roberts coined the term “medicine ball” in reference to the fact that using the ball “invigorates the body, promotes digestion, and restores and preserves one’s health“. As “health” and “medicine” were considered to be synonymous terms at the time, calling it a “medicine ball” was natural enough.

Today, we still refer to medicine balls as such, even though the terms “health” and “medicine” aren’t as synonymous as they once were. “Health ball” also doesn’t quite have the same ring to it.