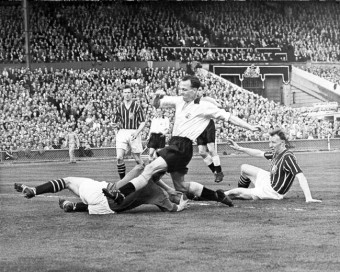 Bert Trautmann was born October 22, 1923 in Bremen, Germany. Blue-eyed and blond haired, Trautmann was the product of a tumultuous political climate within the post-World War I country. He grew up surrounded by Nazi-ideology, including blaming the Jews for the country’s economic problems and believing certain Germans, such as himself, were members of the “master race.”

So it’s not surprising that he joined what would become the “Hitler Youth” when he was ten years old. He later said of this, “At that age you just want adventure. It was just like the boy scouts. It was fun – sport, sport, sport. The idea that we were Nazis at the time is nonsense. The indoctrination came later.”

And, indoctrinated he was.

Although you didn’t know it, your mind was influenced by the Nazi propaganda. You listened to the political speeches. I would be lying if I said I wasn’t impressed. People have an affinity towards their own and the Nazi’s were telling us that German people were suffering apparent atrocities in Poland or wherever. We didn’t realise the power of propaganda…

Hitler seized his chance in a country in turmoil. He said: ‘If you vote for me I’ll get you this and I’ll do that’. People had no idea that he was preparing himself for war and to occupy Europe. They just wanted food and prospects for their families.

When the war broke, he eagerly volunteered for the Germany army.

Most of my friends did too, we didn’t think why or for what. Hitler had influenced the education system to such an extent that we didn’t form opinions. We were indoctrinated. There was peer pressure to join the Hitler Youth and then the forces proper…

People say ‘why?’, but when you are a young boy war seems like an adventure. Then, when you’re involved in fighting it’s very different, you see all the horrible things that happen, the death, the bodies, the scariness. You can’t control yourself. Your whole body is shaking and you’re making a mess in your pants.

While he initially underwent training to become a radio operator, he proved less than adept at the tasks involved and switched gears to become a paratrooper instead.

As such, Trautmann, only a month out of paratrooper training, joined other German soldiers in invading Russia in June of 1941. He later stated, “We just followed orders, we didn’t know that Moscow was the ultimate target and we seldom had face-to-face contact with the enemy. You could hear the guns but you never saw people die.”

However, that October marked the eighteen year old’s first experience with the brutality of Hitler’s ideology, and the experience left a mark on him. Trautmann and another soldier set out to investigate gunshots heard in a nearby forest when they stumbled upon a mass execution conducted by the notorious Einsatzgruppen, also known as the SS.

It was hard to take in. There were trenches dug in the ground about three metres deep and fifty metres long, and people were being herded into them and ordered to lie face down, men, women and children. Einsatzgruppen officers stood above, legs astride, shouting; a firing squad was lined up at the edge of the trenches, shooting into them. For a while everything went quiet, then another group was ordered forward and the firing squad shot another salvo into the trench…

After witnessing this, the pair very carefully crawled away from the site. Had they been discovered by the SS, they would have wound up in the trench too.

After spending nearly three years on the Eastern front, including being captured by the Russians and later escaping, Trautmann’s regiment was moved west. At this point, he was among about 100 soldiers left in his regiment which was 6,000 strong when it entered Russia.

Then in March of 1945, he decided that he had enough. Nearly everyone in his unit was dead anyway, so he deserted from the German army. This was no small decision. He stated later, “I realised that war wasn’t good. You couldn’t desert though because the SS would pick you up if you strayed too far. They would shoot you or send you to the front with the youngest soldiers.”

Nevertheless, with no papers granting leave, he decided to risk it and head for his home in Bremen, attempting to avoid soldiers from both sides of the fight. “I wandered through fields until night fell. I found myself close to a village. It was unerringly quiet. Something didn’t quite seem right and I went into a farmhouse for shelter. From nowhere, Americans jumped on me.”

They soon made him turn around with his arms above his head. “Then I heard their guns click. They were about to shoot me.” But they didn’t.  “I’ve no idea why, but the officer just told me to clear off. So I did. I ran and ran, over hedges and through fields…I ran straight into six camouflaged British soldiers. They were less forgiving.”

The young soldier who had been awarded five medals, one of which was the Iron Cross (and all of which he would later toss in the garbage), for his acts during the fighting was shipped to England to the POW camp at Kempton racecourse, and then transferred to Camp 180 in Northwich, Cheshire.

However, a problem arose in the camp, not so much from the POW’s towards their captors, or vice-versa, but rather between the Germans.  Many of the captured POWs were ardent anti-Nazis, while others were Nazi to the core, and then there were those in-between. Needless to say, these groups didn’t get along well and things came to blows regularly. Thus, the British had to divide them up, separating them based on political opinion.

The groups were, Group A: anti-Nazis; Groups B: those who were more or less politically neutral; and Group C: those who were thoroughly indoctrinated with Nazi ideologies.

Having been raised on Nazi propaganda, despite being somewhat disillusioned at this point, Trautmann still held to these ideologies and was placed in Group C.  He later stated, “When people ask me about life, I say my education began when I got to England. I learnt about humanity, tolerance and forgiveness.”

His reeducation began by being forced to watch a film about the Holocaust and learning of the concentration camps. “My first thought was: ‘How can my countrymen do things like that?'”

He was then made to work as a driver for a Jewish officer, Sergeant Hermann Bloch, to which he, “quickly came to see Bloch, and every other Jew, as human beings. At first I sometimes lost my temper with him, but, in time, I talked to him as if he was just another English soldier. I liked him.”

At the same time he was learning to let go of Nazi ideology, he also played soccer in his free time, a hobby he had since childhood where he’d once been given a certificate of athletic excellence signed by the president himself.

The twenty-two year old quickly became a star on the field at the camp. He played as a centre-half until his teammates convinced him to switch to goalkeeper after he suffered an injury.

After being released from the POW camp in 1948, Trautmann decided against returning to Germany, instead remaining in Great Britain, working for the government disposing bombs. He also continued to play goalkeeper on the semi-professional St. Helens Town team. Word quickly spread of his talent, and the professional soccer team of Manchester City Football Club offered him a position in 1949.

But having a former highly decorated German soldier on the team didn’t sit well with the public so soon after the war, particularly among the Jewish populace. A crowd of more than 20,000 people protested outside of the stadium and letters arrived that derided the team for signing a former member of the Luftwaffe.

However, Manchester’s Communal Rabbi, Dr. Alexander Altman, wrote a letter which was published in the Manchester Evening Chronicle arguing against such blanket hate against the country’s former enemies. He stated, “Despite the terrible cruelties we suffered at the hands of the Germans, we would not try to punish an individual German, who is unconnected with these crimes, out of hatred. If this footballer is a decent fellow, I would say there is no harm in it. Each case must be judged on its own merits…”

As Trautmann’s conduct at the time was exemplary, he eventually won over the fans. “Thanks to Altmann, after a month it was all forgotten… Later, I went into the Jewish community and tried to explain things. I tried to give them an understanding of the situation for people in Germany in the 1930s and their bad circumstances…”

Of course, it helped that he was exceptional at his position. For instance, in his first match in London, he was initially booed and called all manner of names by the crowd. However, after making several truly outstanding saves during the match, at the end of the game he received a standing ovation, even from the opposing team who applauded him along with the crowd as he walked off the pitch.

He went on to play in over 500 games for the organization over the next fifteen years and is generally considered one of the greatest goalkeepers in the history of the sport, and the first of that position to ever win the FWA Footballer of the Year Award, which he accomplished in 1956- the same year perhaps the most well-remembered event of his career took place.

The incident in question took place on May 5, 1956, during the FA Cup Final between Manchester City and Birmingham City.

In the second half of the game, the score stood 3-1 Manchester City. Trautmann was guarding the goal when an opposing player, Peter Murphy, attempted to score. Trautmann dove for the ball and ended up with Murphy’s knee connecting behind his ear.

The immediate result was simply that he saw stars and experienced significant pain in his head and neck. But due to a rule at the time that did not allow players to be substituted, he continued to play the last sixteen minutes of the game “in a kind of fog.”

Despite this “fog,” he managed to make several critical saves in the last minutes of the match, saving the game for Manchester City.

During the medal ceremony after the game, Prince Philip noted to Trautmann that his neck looked crooked, but Trautmann gave little thought to the matter and even attended the banquet after, despite the pain in his neck and that he couldn’t turn his head.

The next day, he did go to see a physician, who told him it was nothing to worry about, and just a crick in his neck that would resolve itself in time. But the pain continued and was so severe that three days later he decided to get a second opinion. That’s when an X-ray revealed that he had five dislocated vertebrae, one of which had completely cracked in two. The only reason he had avoided being paralyzed and possibly killed after the initial kick and as he dove around later in the game was that one of the other dislocated vertebrae had wedged itself tightly against the broken one, preventing the two broken pieces from moving.

Trautmann continued to play after healing from the injury, finally retiring as a player in 1964.

Among other awards he received in his lifetime, the significant role he played in normalizing British and German relations after World War II led to Queen Elizabeth II appointing him an “Honorary Officer of the Order of the British Empire” in 2005. He died eight years later at the age of 89 at his home in Spain.