November 19, 2014 Karl Smallwood
Pat A. asks: Were Kamikaze pilots all just volunteers or how exactly did they get selected? 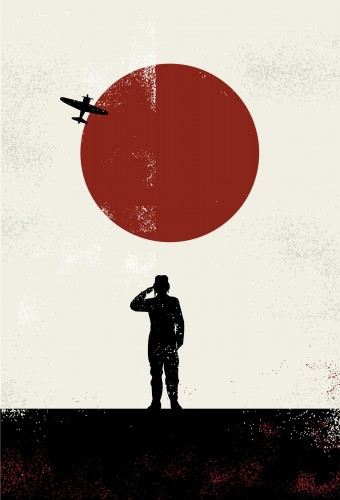 During WWII, thousands of Japanese pilots made the ultimate sacrifice for their country by becoming, essentially, flying suicide bombers. But what was it that made these men so willing to lay down their lives in such a way? Were they really bright eyed volunteers eager to sacrifice themselves for the greater good, as the war time propaganda stated, or were they forced into it? Also, why exactly did the Japanese military resort to such a tactic in the first place?

For starters, the Japanese military brass were desperate.  The enemy had them outgunned, out-manned, and possessed certain critical technologies that Japan didn’t have.  To illustrate how dire things were, going back to 1942, in a single day in June of that year Japan lost more airmen than they had managed to train in an entire year just before the war. Adequately training new pilots fast enough simply wasn’t feasible. This resulted in sending out relatively inexperienced pilots in outdated aircraft. There was a reason the Battle of the Philippine Sea in June of 1944 became nicknamed “The Great Marianas Turkey Shoot” by the Allies.

Further, death before defeat was firmly ingrained in the Japanese military culture at the time.  In Emiko Ohnuki-Tierney’s work, Kamikaze Diaries (accounts by the so-called “student soldiers” of Japan from their writings during the war- many of the prospective kamikaze volunteers were these “boy-pilots”), it stated one of the first things student soldiers learned was

to use his toe to pull the trigger [of his rifle] while pointing the gun precisely at a certain point under his chin so that the bullet would kill him instantly. He was supposed to use this technique if he was trapped in a cave or in a trench surrounded by the enemy. If he did not kill himself but tried to escape, he might be shot from behind, because his superiors and some comrades believed in the state dictum that one must never be captured by the enemy.

This brings us to the Tokubetsu Kōgekitai (literally, “Special Attack Unit”), members of which are commonly called “kamikazes”. Though the idea of sending pilots on one-way suicide missions is largely attributed to one, Capt. Motoharu Okamura, reports of Japanese pilots intentionally crashing their planes into the enemy, often when damaged too much to return to base, weren’t unheard of prior to the start of the suicide pilot initiative in 1944. However, it was Capt. Motoharu Okamura who is largely believed to have been the first high-ranking Japanese officer to propose the idea as a preplanned tactic. Famously stating:

In our present situation I firmly believe that the only way to swing the war in our favor is to resort to crash-dive attacks with our planes. There is no other way. There will be more than enough volunteers for this chance to save our country, and I would like to command such an operation. Provide me with 300 planes and I will turn the tide of war.

That said, it was not Okamura, but then Vice-Admiral of the Japanese Navy, Takijiro Onishi who is credited with creating the first squadron of kamikaze pilots. Onishi reportedly approached his superiors to ask to create a suicide squad and was granted permission on one condition, he was only allowed to recruit volunteers.

Determined to make his suicide squads a reality, Onishi personally made the very first announcement requesting volunteers for the “special attack force” at Mabalacat Air Base. All 23 pilots asked to join ultimately volunteered.

From here, reports of the day are that many more pilots than there were planes eagerly signed up (supposedly so many that they outnumbered the available planes 3 to 1).  As Captain Motoharu Okamura stated, “There were so many volunteers for suicide missions that he referred to them as a swarm of bees… Bees die after they have stung.” (In truth, bees do not usually die after they sting things.  This generally only happens when they sting humans, as their stingers get stuck in our fleshy skin.  This is not the case when they sting many other animals.)

However, the official story of droves of zealous volunteers clamoring to sign up has been questioned by many historians, particularly with firsthand accounts from actual pilots popping up since, painting a decidedly less patriotic or eager tone.

Imperial Japanese Navy Gekitsui-O (flying ace), Saburo Sakai, who had at least 28 victories ranking him fourth for the war for Japan, including shooting down or severely damaging over 60 Allied planes, stated in an interview, “Even now, many faces of my students come up when I close my eyes. So many students are gone. Why did headquarters continue such silly attacks for ten months! Fools! … all those men lied that all men volunteered for kamikaze units. They lied!”

Further, many of the “boy-soldiers” who ended up becoming kamikaze pilots were brutally treated during their training, to the point that, based on firsthand accounts from the trainees, many lost any sense of patriotism. For instance, Irokawa Daikichi stated he was “struck on the face so hard and frequently that [his] face was no longer recognizable… I was hit so hard that I could no longer see and fell on the floor. The minute I got up, I was hit again by a club…”  Officially, the purpose for this extremely brutal “training” was to instill in the soldiers a “fighting spirit”.

Hayashi Ichizo went on to say,

It is easy to talk about death in the abstract, as the ancient philosophers discussed. But it is real death I fear, and I don’t know if I can overcome the fear. Even for a short life, there are many memories. For someone who had a good life, it is very difficult to part with it. But I reached a point of no return. I must plunge into an enemy vessel. To be honest, I cannot say that the wish to die for the emperor is genuine, coming from my heart. However, it is decided for me that I die for the emperor.

These were sentiments echoed by Lieutenant Yukio Seki, who commanded the first squadron of 23: “Japan’s future is bleak if it is forced to kill one of its best pilots… I am not going on this mission for the Emperor or for the Empire… I am going because I was ordered to.”

While there certainly were those who were willing to volunteer to die for emperor and country, and many more willing to die in this way simply because they felt, somewhat correctly, that they were the last line of defense to protect their families and friends at home, in truth many seem to have simply been pressured into it.

So what tactics were specifically used to convince the volunteers?

As noted in Mako Sasaki’s paper, Who Became Kamikaze Pilots, and How Did They Feel Towards Their Suicide Mission, published in The Concord Review, some men were recruited to the program by way of a simple questionnaire. The questionnaire comprised of a single multi-choice question that asked: “Do you desire earnestly/wish/do not wish to be involved in kamikaze attacks?”  All the men had to do was circle the statement they most agreed with. The kicker being that although the men were free to say they didn’t want to take part, they still had to sign their name to it. As Sasaki points out, the pressure on young men to do something for their country during that time was significant, and the threat of retaliation if you said no was very real, as was the fear that there would potentially be retaliation against not only the soldier, but his family back home.

According to the aforementioned Emiko Ohnuki-Tierney, in Kamikaze Diaries, other methods of encouraging men to volunteer included putting them in a room filled with their peers. After a lengthy speech on patriotism, it was asked that anyone who didn’t wish to be a kamikaze step forward. As you can imagine, volunteering by default in this way was extremely effective. Beyond any loyalty to country and emperor, few would want to appear so cowardly, or endure the shame of not being willing to die when their fellow soldiers were giving their own lives to protect their homeland, both those present when volunteers were being asked for and ultimately those who’d already fulfilled their suicide missions. This latter point was frequently written about in the letters and journals from many of the volunteers as to why they ultimately chose to do so.

If you’re wondering what happened to the few men that said no, according to Emiko,

If a soldier had managed to be courageous enough not to volunteer, he would have been consigned to a living hell. Any soldier who refused would become persona non grata or be sent to the southern battlefield, where death was guaranteed. Some soldiers actually managed to say no, but their refusal was disregarded. Kuroda Kenjirō decided not to volunteer, only to be taken by surprise when he found his name on the list of volunteers for the Mitate Navy tokkōtai corps; his superior had reported proudly that all the members of his corps had volunteered.

Not all kamikaze pilots died though. If a pilot’s plane developed a problem en route or if a suitable target didn’t present itself, there was nothing stopping him from returning to base to try again later. In fact, the manual given to kamikaze pilots stated: “In the event of poor weather conditions when you cannot locate the target, or under other adverse circumstances, you may decide to return to base. Don’t be discouraged. Do not waste your life lightly.”

All that said, in an interview with an ex-kamikaze pilot named Tadamasa Itatsu, he notes that some young men were willing to lay down their lives simply because they genuinely “believed their actions could save their country from disaster“.

As Ichizo Hayashi stated in a letter he wrote in April of 1945, a few days before his death, “I am pleased to have the honour of having been chosen as a member of a Special Attack Force that is on its way into battle, but I cannot help crying when I think of you, Mum. When I reflect on the hopes you had for my future … I feel so sad that I am going to die without doing anything to bring you joy.”

This all might leave you wondering how effective the kamikaze program was for the Japanese.  According to the U.S. Air Force, nearly three thousand kamikaze attacks took place, managing to damage 368 ships, sinking 34 of them, while killing 4,900 navy soldiers and wounding another 4,800, but with only about 14% of attacking kamikaze pilots managing to hit a ship. So, in that sense, plane for plane, it was tragically successful considering the Americans had radar, superior numbers and planes, and the kamikaze pilots were often woefully inexperienced.

But on the other hand, perhaps Lieutenant Commander Iwatani said it best in a March of 1945 edition of Taiyo magazine,

I cannot predict the outcome of the air battles, but you will be making a mistake if you should regard Special Attack operations as normal methods. The right way is to attack the enemy with skill and return to the base with good results. A plane should be utilized over and over again. That’s the way to fight a war. The current thinking is skewed. Otherwise, you cannot expect to improve air power. There will be no progress if flyers continue to die.