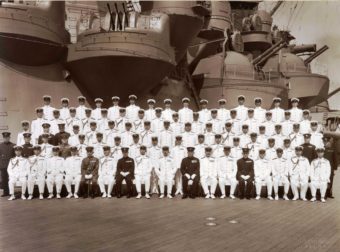 Prior to WW2, knowing that they couldn’t compete with the numbers of the US navy, the Imperial Japanese Navy quietly authorised the construction of the two largest battleships by weight ever seen in warfare- the Musashi and her sister ship, the Yamato.

The origins of these two behemoths can be traced back to Japan’s 1934 withdrawal from the League of Nations. Amongst other things, doing this allowed Japan to ignore rules set by the Washington Naval Treaty of 1922 and the London Naval Treaty of 1930, both of which aimed to limit the size of battleships as well as the right of participating nations to construct them.

Almost immediately following Japan’s withdrawal, a team working for the Japanese Navy Technical Department helmed by an engineer called Keiji Fukuda began submitting designs for a class of battleships superior in size and firepower to anything ever seen before.

While initially planning to build five of these battleships, ultimately only two were completed, with a third being converted to an aircraft carrier mid-way through construction.

The two completed ships, the Musashi and the Yamato, were quite literally in a class of their own, designed to displace some 73,000 long tons when fully equipped. For reference here, the United States’ Iowa class battleships created around the same time, while of similar length, weighed about 40% less.

As one Japanese officer, Naoyoshi Ishida, described, “How huge it is! When you walk inside, there are arrows telling you which direction is the front and which is the back—otherwise you can’t tell. For a couple of days I didn’t even know how to get back to my own quarters. Everyone was like that…. I knew it was a very capable battleship. The guns were enormous.”

On that note, not just big, these ships also featured nine of the largest guns ever put on a battleship, featuring 460 mm barrels and weighing an astounding 3,000 tons each, with all nine combined weighing approximately as much as the United States’ Wyoming, New York, and Nevada class battleships.

These weapons were capable of firing shells that weighed up to 3200 pounds (1450 kg)- or, in other words, in the ballpark of what a typical full sized sedan car weighs. While you might think the range when shooting such an object must have been poor, in fact, these guns could hit a target over 25 miles (40 kilometers) away. They could also be fired at a rate of about once every 40 seconds.

The shockwave produced by one of these guns firing was noted as being powerful enough to tear the skin off of a human if an unlucky individual stood within 15 metres of it without proper shielding. This shockwave also resulted in nearby anti-aircraft guns having to be specially armored to protect them from this.

Speaking of anti-aircraft guns, ultimately these ships were equipped with approximately 150 25 mm guns. In between these and the massive 460 mm cannons previously described, the ships also featured six 155 mm and 24 127 mm guns.

Further, if not needing the 460 mm cannons for hitting ships far away, these battleships were equipped with so-called “beehive rounds” to fire from those cannons. In a nutshell, these rounds were filled with nearly a thousand incendiary tubes and hundreds of shards of steel. The round also included a fuse and explosive that would cause the shell to explode out, with the incendiary tubes igniting shortly thereafter, producing a wall of flame and molten steel meant to absolutely obliterate enemy aircraft. Essentially, the idea here was to convert these guns into comically large shotguns, able to pick any enemy birds out of the air.

Armor-wise, each ship possessed on its outer shell a protective layer some 16 inches thick.

While you might think this all combined must have made these ships slow as molasses, it turns out, they had a top speed of about 27 knots (31 mph). While not the fastest battleship in the world, this compared favorably to, for instance, the aforementioned Iowa class battleships that weighed about 40% less, but could only go about 6 knots faster.

Despite their awe-inspiring power and the full confidence of Japanese military brass that each ship was “unmatchable and unsinkable”, neither saw much combat. In fact, the Yamato spent so much time protecting Japanese ports that it was nicknamed the “Hotel Yamato”.

The reluctance of the Japanese navy to commit either ship to combat was motivated by both the scarcity of fuel in Japan during the war, with these battleships taking copious amounts of such to go anywhere, and the fact that military brass believed losing either ship would be a massive blow to the morale of the rest of the Japanese military.

Of course, in the closing months of WW2 with their forces almost completely obliterated, Japan reluctantly began committing both battleships to naval engagements. Unfortunately at this point these super battleships were so absurdly outnumbered in the limited engagements they’d ultimately take part in that they mostly just functioned as sitting ducks.

Most notably, they proved especially vulnerable to aircraft attacks. Even the aforementioned beehive rounds, which the Japanese believed would decimate aircraft, proved to be little more than a visual deterrent, with some American pilots simply flying straight through the flaming shrapnel they produced.

And while the near couple hundred anti-aircraft guns made it so it took a brave pilot to dive bomb the ships, the sheer number of aircraft that the Americans could throw at these battleships at the same time and how chaotic the battles got, ultimately saw these guns prove just as worthless in practice.

It didn’t help that at this point in the war Japan’s own aircraft were ridiculously outnumbered and outclassed, providing little to no air cover to try to protect the massive battleships. (See our article, How Were Kamikaze Pilots Chosen?)

Ultimately the Musashi was lost during the battle of Leyte Gulf in October of 1944, taking 19 torpedo and 17 bomb strikes to sink it.

As for the Yamato, it took part in her final engagement in April of 1945 in operation Ten-Go, which was an intentional suicide mission.

The Yamato was to be the tip of the spear of this final, last-ditch effort to repel the American advance. Its crew was ordered to beach the ship near Okinawa and use its main battery to destroy as much of the invading force as possible. Essentially, the ship would function as a base on the island, and members of the near 3,000 strong crew not needed to operate weaponry aboard the ship were to wage a land battle with any enemy forces encountered.

The mission plan was flawed from the outset, however, and performed under protest of some of the Japanese Navy brass involved, who noted there would be no chance of even reaching the target island in the first place given the stated plan, including no air support whatsoever, and time of day they were to execute the plan (broad daylight).

This turned out to be correct- en route on April 7, 1945, the Yamato and handful of accompanying ships were completely, and quickly, overwhelmed by a combined assault from 6 cruisers, 21 destroyers, 7 battleships, and a few hundred aircraft.

One surviving member of the Yamato crew, junior officer Yoshida Mitsuru, had this to say of the battle that they all had known was a suicide mission from the start,

How many times, in target practice, have we conducted such tracking? I am possessed by the illusion that we have already experienced searches under the same conditions, with the same battle positions, even with the same mood.

What is going on before my very eyes, indisputably, is actual combat — but how can I possibly convince myself of that fact?

The blips are not an imagined enemy but an enemy poised for the kill. The location: not our training waters, but hostile waters.

More than one hundred enemy planes attacking!” Is it the navigation officer who calls this out?

As my whole body tingles with excitement, I observe my own exhilaration; as I grit my teeth, I break into a grin. A sailor near me is felled by shrapnel. In the midst of the overwhelming noise, I distinguish the sound of his skull striking the bulkhead; amid the smell of gunpowder all around, I smell blood….

The tracks of the torpedoes are a beautiful white against the water, as if someone were drawing a needle through the water; they come pressing in, aimed at Yamato from a dozen different directions and intersecting silently. Estimating by sight their distance and angle on the plotting board, we shift course to run parallel to the torpedoes and barely succeed in dodging them.

We deal first with the closest, most urgent one; when we get to a point far enough away from it that we can be sure we have dodged it, we turn to the next. Dealing with them calls for vigilance, calculation, and decision…. That these pilots repeated their attacks with accuracy and coolness was a sheer display of the unfathomable undreamed-of strength of our foes.

In the end, it took only 2 hours for American forces to destroy the single most powerful ship constructed during WW2, along with most of the tiny fleet it set out with. When the smoke cleared, around 4,000 were dead on the Japanese side vs. just around a dozen dead on the American side and a few more wounded.