New York City struggled to meet its recruitment goals during the spring of 1917. The United States had recently entered World War I, which had been raging in Europe since 1914 (see: What Really Started WWI), and the military needed volunteers. While New York City had a population of around 6.5 million at the time, it lagged behind its goal of 2,000 recruits to the United States Navy by under half.

So New York City’s Mayor, John P. Mitchel, decided that he needed a gimmick to spark young men’s interest and convince them to volunteer for the war. What better way to draw attention to the Navy than to construct a battleship in the middle of Union Square? Teaming up with the Navy on the project, the Mayor’s Committee on National Defense raised approximately $10,000 (about $187,000 today) to fund the ship and hired Jules Guerin and Donn Barber to design the appropriately named USS Recruit, basing the design loosely on the USS Maine.

With work rapidly completed by the U.S. Navy, the USS Recruit, also known as the Landship Recruit, was built on the island of Manhattan. Construction finished for a “launch” on May 30, 1917, with the ship being christened by Olive Mitchel, the Mayor’s wife. (See: Why We Break A Bottle of Champagne Against New Ships)

The wooden battleship mockup measured over 200 feet long and had a beam, or width, of 40 feet. While not actually armed for battle, the ship featured wooden replicas of two cage masts, six 14-inch guns inside three twin turrets, and ten 5-inch guns. It also had two 50-foot masts, an 18-foot tall smokestack, a main bridge, and a conning tower. 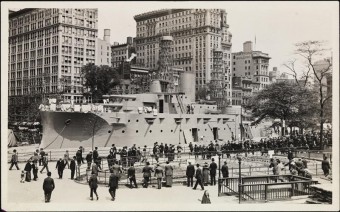 The Landship Recruit contained ample space for the job of recruiting and training sailors, with multiple waiting rooms and physical exam rooms, complete with full amenities. Doctors, officers, and sailors lived aboard the ship in their separate quarters.

As for the latter, the initial complement was thirty-nine sailors-in-training from the Newport Training Station and their commander, Captain C.F. Pierce. The crew maintained a similar routine to the one of a crew at sea. As reported by Popular Science Magazine in August of 1917, 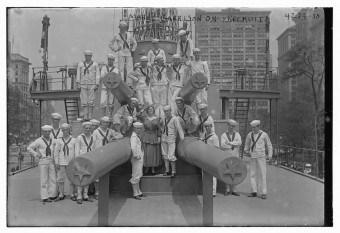 The land sailors arise at six o’clock, scrub the decks, wash their clothes, attend instruction classes, and then stand guard and answer questions for the remainder of the day.  There is a night as well as a day guard.  From sunup to eleven o’clock all lights of the ship are turned on, including a series of searchlight projectors.

In addition to recruiting volunteers for the Navy and training new sailors, the USS Recruit served as a public relations tool. Citizens were invited onto the ship to learn about then modern battleships, and the sailors aboard routinely answered the public’s questions during their guard duty. Both patriotic and social events were also held on the battleship with the sailors acting as hosts. One patriotic event, according to a contemporary account from The New York Times, was the presentation of a recreation of Betsy Ross’s American flag. Other events were just social in nature, such as dances held for New York’s social elite.  There were reportedly even Vaudeville shows held on board. 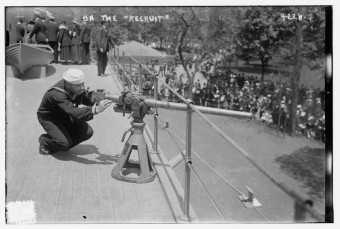 World War I ended in November of 1918 when both Austria-Hungary and Germany agreed to an armistice while the terms of peace could be negotiated. However, the USS Recruit continued its recruitment mission until March of 1920. It had helped the Navy recruit an astounding 25,000 new sailors (enough to man the USS Maine, which the Recruit was loosely modeled after, a whopping 45 times over) during its three years of operation.

At this time, the Navy announced that it would move the wooden battleship from Union Square to Luna Park on Coney Island and maintain it as a recruitment site there.

The New York Times described the “sailing” of the Recruit in an article on March 17, 1920:

Yesterday when 10 o’clock came around and with it ‘sailing time’ all of the ceremonies were put on. The crew of eighty men lined up on the quarterdeck and the ship was formally abandoned while the Stars and Stripes and the commissioned pennant were hauled down. The ship’s band struck up ‘The Star-Spangled Banner’ as the colors were lowered to the deck. 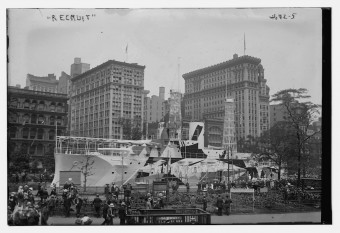 The ship was then carefully dismantled over the course of a few days, with the pieces shipped off to Coney Island. Though The New York Times estimated that it would take just two weeks for the Navy to complete the move of the battleship, it was never rebuilt.

Out of sight, out of mind, no contemporary news source seems to have bothered to cover why the ship, which was supposed to be immediately rebuilt, was not. What happened to the pieces of the dismantled ship is also a mystery to this day.   A search through the Navy archives for the period in question likewise turned up nothing insightful concerning the ship’s demise. Presumably it was simply decided at the last minute that rebuilding and maintaining the ship was an unnecessary expense given the Navy’s recruitment needs at the time. Alternatively, perhaps the 1920 New York Times piece simply got it wrong, news outlets, even then, not exactly known for their accuracy on the details of reports for various reasons, such as often having to rush submissions. 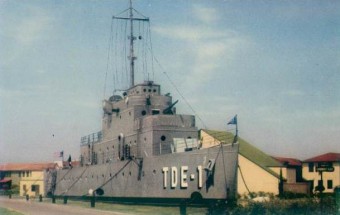