Why Do Racehorses Have Such Weird Names?

November 2, 2018 Karl Smallwood
Jared asks: Why do racehorses have such weird names? Who picks them? 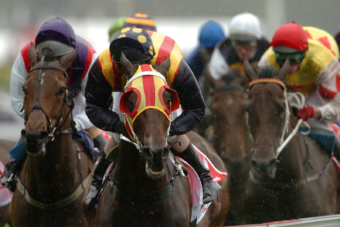 In the world of horse racing, the name of a given horse is considered to be almost as important as its ability to run. Thanks, in part, to a large number of rigid rules put in place by the the various governing bodies of the sport, picking a name is an exercise in creativity as much as it is a simple way to identify a horse.

You see, to race a thoroughbred in near enough any location on Earth it must have a name that conforms to strict regulations laid out by The International Federation of Horseracing Authorities. In addition, depending on where in the world you are, there may be further stipulations a chosen name must adhere to for the horse to race in that region.

First though, let’s discuss the rules laid out by The International Federation of Horseracing Authorities. For starters a chosen name can be no longer than 18 characters long and to make things just a little more difficult, spaces and punctuation marks count towards this limit. For this reason, many owners choose to simple forgo spaces and punctuation when picking a name for a horse- our personal favourite example of which being the horse Eighteencharacters, a name that is, somewhat amusingly, exactly 18 characters long.

Now, although 18 characters may seem like plenty, another rule handed down by The International Federation of Horseracing Authorities that makes picking a name just a tad more difficult is that no two horses currently racing can have the same name. To avoid confusion between horses, once a name is registered with the relevant horseracing authority required, similar sounding names are also banned.

On top of all this, when a horse retires, its name cannot be used again for at least another 20 years with this being extended to 35 years if the horse goes to stud, again to avoid confusion and out of respect for the owner. This rule is ignored if a given horse wins a major event, in which case its name is retired forever. Exceptions to this rule can be made if a given horse is competing in another part of the world, though generally the owner is required to add the prefix of the horse’s country of origin to the end of its name to differentiate it from the other horse.

Reading this you can probably start to understand why owners choose such eclectic names- but we’re not done yet. There are still a lot more rules we need to discuss. For example, a chosen name can’t be, to quote, “in poor taste”, a polite way of saying it can’t be offensive to a particular religious, political or ethnic group. And if you’ve ever tried to say, well, anything, online, you probably know that almost everything is offensive to some group out there.

Furthermore, a name cannot be used for advertising purposes or contain a trademarked term or something like that. Understandably, a name also cannot contain any vulgarity- a rule many owners seem to take great enjoyment in trying to circumvent, a few of which we’ll mention in the Bonus Facts later.

Finally, you cannot name a horse after a living person without express written permission from that person.

Moving on to more region-specific rules, in the United States, for example, The Jockey Club requires any owner registering a horse with a name that has “meanings that are not self-evident” to explain what it means before it will be approved. The reasoning being to stop names that may circumvent any of the previously stated rules from slipping through the net. Curiously, The Jockey Club seems to be more lenient when it comes to allowing names that are overtly political in nature than other parts of the world, with horse’s like Obama’s Promises and Palin Power being approved.

In the UK, on the other hand, Weatherbys (the administrative arm of the British Horse Racing Authority) dictates that a name can’t be more than 7 syllables long- a rule that rarely comes into play given the 18 character name limit, so isn’t a rule handed down in other jurisdictions.

UK horseracing authorities also take special care to vet names that may have a different meaning in other cultures- a commonsense rule given the proximity of Great Britain to the melting pot of cultures that is Europe.

The difficulty of naming a horse is only compounded by the fact that in addition to being unique, a name – as a rule – should be fairly memorable. The reason being that nobody is going to bet on a horse with a lame name, unless it happens to have a famous owner or heritage. This is a fact that probably explains why the Queen is happy to choose fairly boring names like Pall Mall or Sea Shanty for her racing horses.

Speaking of heritage, a common trend when it comes to naming racehorses is to choose a name that is a subtle hint to the individual horse’s lineage. For example, we have the horse Inside Information, the offspring of a stallion called Private Account and a mare called Pure Profit.

Another trend when it comes to naming racehorses is to simply pick a name that sounds funny or is difficult to pronounce, usually just to annoy racing commentators. An example of this is a horse bought by one of the writers of the film Airplane, David Zucker named All Pink. If that doesn’t sound all that funny we should note that Zucker specifically instructed the jockey riding All Pink to hug the inside of the track so the commentator would have to keep saying the phrase “It’s all pink on the inside”.

Other examples of naming shenanigans include horses named DoReMiFaSaLaTiDo, Ha Ha Ha and simply, ARRRRRR, all of which were named, partly, to mess with commentators.

To conclude though, the reason racehorses tend to have such weird names is largely due to strict regulations handed down by the highest authorities in horseracing, which necessitate owners getting, shall we say, creative when coming up with a unique and memorable name. In fact, it’s noted that around a third of all submitted horse names are rejected outright for breaking one or more rules. For this reason, many owners submit multiple names just to ensure one gets accepted as invariably one or more of them will be breaking some rule or other.