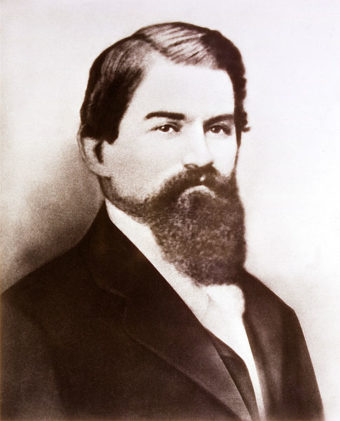 The sickly sweet sugar water known as Coca-Cola was initially marketed as a magical cure-all tonic for every kind of “nervous affliction” imaginable from headaches to hysteria- a condition that, fun fact, used to be treated in women through medically administered orgasms. This ultimately led to the creation of vibrators to help out the no doubt cramped handed doctors who just didn’t have the stamina to keep up with the countless hysterical women banging on their doors… (More on this in our article Why Women Fainted So Much in the 19th Century)

Of course, as with so many new ventures, when it first became available to the public on May 8, 1886, Coca-Cola was a bit of a flop, averaging only about 9 glasses per day sold in the first year. This was despite the fact that it debuted at one of the most popular soda fountains in Atlanta, Georgia, located in Jacob’s Pharmacy. For reference here, their gross earnings on soda sales, according to the owner of the pharmacy, Dr. Joseph Jacobs, was about $150 per day (or about $4,100 today), of which Coca-Cola accounted for about 45 cents daily in the first year.

This is mildly surprising considering not only is Coca-Cola reasonably tasty, but it was also, as mentioned, being marketed by the medical professionals involved as a cure for countless medical issues, including a rather serious one in morphine addiction. On top of that, they also pitched it as something of the Viagra of its day… (No doubt this effect on men is partially how it was supposed to go about curing hysteria in women…)

And if the marketing and flavour didn’t work, their trump card was the fact that it contained coca leaf extract, a.k.a. cocaine, as well as lime juice which aids in cocaine absorption in the stomach for maximal bang for your buck on the drug element. Seemingly this should have seen it become a huge hit rather quickly, though it is noteworthy that various cocaine products were widely available at the time, so perhaps people didn’t have need to come back to Coca-Cola to get their fix.

Whatever the case, as to how its inventor, pharmacist John Pemberton, came up with the tonic, he was specifically looking for a cure for his own morphine addiction. You see, Pemberton was a former Confederate soldier who nearly had his head lopped off in the Battle of Columbus. During his recovery from his wounds, as with so many others at the time, he became addicted to morphine and so was looking for something to wean him off the habit.

This all led him to experimenting with coca-leaf extract, and thus Pemberton’s French Wine Coca was born, which he claimed did the trick. (Though it should be noted that when he died of stomach cancer two years later in 1888, he was still addicted to morphine.)

Unfortunately for him, his initial concoction also included alcohol (from wine), which became banned in Atlanta where he lived in the same year he debuted his tonic, resulting in him substituting the wine with sugar and citric acid. He also, of course, mixed the whole thing with carbonated water, owing to, at the time, fizzy water being thought to be good for your health.

Finally, in 1886 Pemberton was ready to start selling what would eventually become arguably the most famous non-water beverage brand on Earth. After a deal was struck with Dr. Joseph Jacobs of the aforementioned Jacobs’ Pharmacy and the soda fountain operator within, Willis Venable, Coca-Cola finally graced the world with its presence, selling for 5 cents per serving (about $1.38 today).

Poor sales and a loan Venable had received from Jacobs’ to build a house ultimately saw Venable trade his 1/3 stake to Jacobs in repayment of said cash advance. As for Jacobs, he had little interest in producing and marketing the drink and was generally annoyed with having to deal with Pemberton and his huge financial problems. Thus, not long after he acquired Venable’s share, he sold his entire stake in Coca-Cola to fellow pharmacist Asa Candler, for, to quote Jacobs “some stock in a glass factory on South Pryor Street… This factory, on which the insurance had been allowed to lapse, was destroyed shortly afterward by fire. In addition to the stock I was to receive some odds and ends such as bed pans, pewter syringes, wooden pill boxes, and empty bottles.”

Candler, after buying out the remaining shares, including from Pemberton, would start the process that turned the brand into the beverage powerhouse it is today, by 1919 himself selling the brand and recipe for a cool $25 million (about $361 million today) to a group of investors.

As for Pemberton, when he sold his stake to Candler he did have a thought to leave a partial share to his son, Charles, in the hopes the morphine-addiction curing drink would someday become a huge hit. However, ultimately Charles and he opted to just take as much money as they could get at the time and forgo any further stake in Coca-Cola. Pemberton died shortly thereafter in poverty and his son Charles followed him about six years later, ironically dying of a morphine overdose.