Why Does Soda Taste Significantly Better When Carbonated vs. Flat? 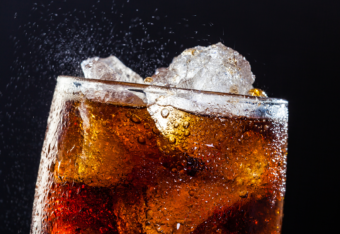 A notion that will come as a surprise to just about no one is that most people think soda and other carbonated drinks taste significantly better when they still contain a lot of fizz as opposed to being “flat.” It turns out that, contrary to popular belief, this phenomenon has nothing to do with bubbles popping on your tongue or the like. (In fact, when people drink carbonated beverages in a highly pressurized environment where no such bubbles can form, they report no real difference in flavor or sensation of the drink.)

So why do many fizzy drinks taste better than their flat equivalents? It’s simply because the carbonic acid (H2CO3) created via adding carbon dioxide (C02) to the drink (which obviously in turn contains H20) actually has a tangible taste that your tongue can detect and which accents the flavor of the beverage.

Thus, as these beverages are designed to taste good in their carbonated form, removing the flavor imparted by the CO2 is usually going to negatively impact taste.  Of course, this doesn’t inherently mean a worse overall flavor for any liquid that is not carbonated vs. the same drink that is. But because many carbonated beverages like popular sodas tend to have a lot of sugar or equivalent artificial sweetener, when the CO2 is removed, the extreme sweet flavor ends up standing out quite a bit more- usually more than most people enjoy. The net result of all of this is many people not enjoying the taste of “flat” sodas.

On a related note, to narrow down the mechanisms behind the taste derived from carbonating beverages, researchers in 2009 used mice that had been genetically modified to not be able to taste variously- sweet, umami, salty, bitter and sour. What they found was that those mice that could not taste sour did not react to carbonation, while all the others did.

Examining why CO2 triggers sour-tasting receptors, the researchers hypothesized (correctly, as it turns out) that a special enzyme on the surface of sour-tasting cells, carbonic anhydrase 4 (Car4), might be the culprit. Once again experimenting on modified mice, this time removing only the Car4, but not the entire sour-tasting cell, they found that “gustatory responses to CO2 were severely reduced,” but “responses to other taste stimuli, including sour, were unaltered.”