Why Do Humans Need to Warm Up Before Exercising?

June 23, 2017 Scott
Simon A. asks: Why do people need to warm up before exercise? Many animals don’t seem to have such an issue, like a cat going from completely still to sprinting after prey. So what exactly is going on internally that makes doing some activity with a warm up first less injury prone than if one just jumps into it? Or is it just a myth that we should warm up and it doesn’t actually do anything? 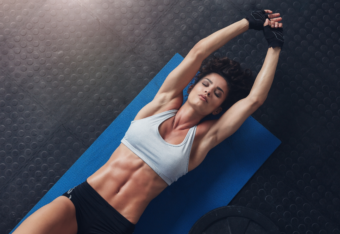 There isn’t a respectable personal trainer in any sport that doesn’t stress the importance of warming up before you begin a workout or athletic endeavor. Most people seem to know you can prevent injuries and allow for better performance should you follow their advice. So, what about warming up allows for these benefits? What exactly is going on in the body when you more slowly prepare it for strenuous activity, rather than just jumping right into it?

The simple answer is that warming up increases blood flow to muscles, allowing for an elevated amount of oxygen and nutrients to be delivered. This prepares the muscles for a rise in workload. Warming up will also begin raising body temperature, which helps you utilize oxygen better. That boost in blood flow also serves to prime the nerves supplying your muscles with impulses, increasing the quality of performance.

Along with the blood flow and temperature benefits, an appropriate warmup also prevents injuries by providing greater range of motion, while simultaneously improving the lubrication of joints, allowing for better movement. Lastly, many trainers posit that a good warm-up before any event where performance is valued can help mentally prepare you for the task to come.

So that’s the high level view of it all. But what actually is going on internally here?

First, let’s look at what gives your body the ability to deliver more oxygen. It seems common sense that if the average heart rate is around 70 beats per minute, and each beat ejects approximately 70 ml of blood, then your heart will circulate about 4.9 liters every minute. The higher the heart rate, the more blood will be pumped. During extreme exercise, studies have shown your heart can pump up to 30 liters per minute! The question then becomes- why does slowly increasing heart rate, and by extension blood flow, vs. suddenly leaping into action and rapidly increasing blood flow allow for better performance, while reducing injury?

When your muscles are working harder than normal, they require more oxygen and nutrients. This provides all the electrolytes responsible for the electrical impulses providing for muscle contraction and glucose to start a cascade of chemical events leading to the production of a molecule called Adenosine Triphosphate (ATP). ATP is responsible for moving those electrolytes (and other molecules) in to, out of, and around your cells. Oxygen is also essential in creating ATP.

When oxygen is used to create ATP, it’s called aerobic metabolism. When you increase the work of your muscles past the point oxygen can make the appropriate amount of ATP, your cells begin to use glucose and acids to make more, also known as anaerobic metabolism.

The byproduct of anaerobic metabolism is the increased production of an acid called pyruvate, which also creates lactic acid. Those acids will cause all kinds of damage to your cells. The resulting pain that follows leaves every marathon runner in agony the next day. The maximum heart rate at which your cells can use oxygen to make ATP is known as your Vo2max.

What does all this chemistry have to do with warming up?

Studies have consistently shown that your Vo2 max is increased when you warm up slowly. This is because the many small capillaries that supply your cells are closed when resting. Should you open them up, they’ll be more able to provide the extra oxygen and nutrients to the working cells. So, warming up will cause those resting capillaries to open up. Thus, when the event starts, and you really need them, they’ll already be able to handle a higher Vo2max, and you get a better performance.

For example, in one study, people were subjected to sprinting at maximum effort for 10-15 seconds without warming up. 70% of them had abnormal ECG findings (the electrical impulses providing your heart with its needed contraction). Those abnormalities were attributed to inadequate blood supply to the heart (anaerobic metabolism). Those affected 70% of participants were then allowed to warm up for just 2 minutes prior to sprinting, again for 10-15 seconds. That little of a warm up was enough to reduce the ECG abnormalities by 90%!

Another way your body gets the benefit of more oxygen is by raising its temperature and making your cells more acidic. An increase in your body’s temperature will support faster muscle contraction and relaxation, as well as a boost to nerve impulses and raise the metabolism of cells. One of the mechanisms for these results revolves around how your body carries that oxygen.

The molecule within your blood responsible for circulating oxygen is called hemoglobin, which attaches and subsequently releases oxygen thanks to the affinity hemoglobin has for oxygen. (That affinity is measured by what is known as the oxygen-hemoglobin dissociation curve.)

To spare you a lengthy technical discussion of how that all works, I’ll just say that, in a nutshell, each hemoglobin molecule can carry four oxygen molecules. That doesn’t necessarily mean it will carry four, but it can. The amount of oxygen it does carry is called oxygen saturation. The more oxygen around the hemoglobin, like in the case of hemoglobin exposed to the air in your lungs, the more saturated it will become. In environments where there is less oxygen present, like in the case of cells that are experiencing anaerobic metabolism, hemoglobin will release the oxygen. That free oxygen is then readily available for your cells to use to create ATP.

Thus, increased blood flow, combined with the greater oxygen metabolism, accounts for several of the known benefits to warming up- namely, the performance enhancement provided by the increased Vo2max, and the priming of the nerves supplying your muscles with their necessary impulses.

Now on to injury prevention.

It’s widely known that warming up will prevent muscle injury, specifically, preventing painful tears and strains. No study to date has definitively shown the exact mechanisms causing the damage. Get a group of people to subject themselves to a study administering muscle stress so great it will tear them while a team of researchers monitors everything going on internally and you might be able provide some detailed insight…

Until then, the leading theory is that “cold” muscles are less elastic and shorter than those that aren’t. Along with the muscles, your ligaments and tendons also shorten up when not particularly used. Should you subject your shortened and stiff muscles, tendons, and ligaments to the force required for strenuous activity, they may snap or tear, somewhat analogous to how a cold rubber band will snap quicker than a warm one when stretched. So, warm up, then stretch appropriately, and your rubber-band-muscles will be able to better elongate like Gumby in a yoga class, thus helping to prevent injury.

As the theory on injury prevention goes, your joints will also begin to become more lubricated during warm up, allowing for greater range of motion (ROM). This is because the production of fluid that brings oxygen and nutrients into the joints, while also providing lubrication (synovial fluid), is increased during exercise. So, warm up, and your joints will also be better able to handle the stress and the increased ROM needed for athletic performance.