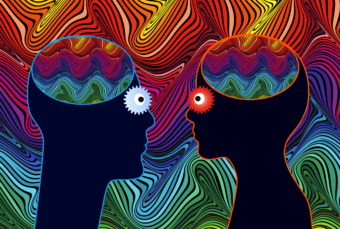 For decades rumors have swirled around the CIA’s testing of lysergic acid diethylamide (LSD) in the 1960s. In seeking a knockout drug weapon, did the CIA slip substances to unsuspecting patsies? The answer is yes. And Frank Olson was the man who paid the heaviest price.

The Olson family—Alice, Frank, and their three young children—lived an all-American, idyllic life in Frederick, Maryland. But unbeknownst to everyone, Frank had a secret life: developing ways of efficiently distributing deadly strains of diseases during bacteriological warfare for the Special Operations Division (SOD) of the army’s Chemical Corps.

While Frank Olson was busy creating ways to hide delivery systems in shaving cream and bug spray cans, a CIA researcher and official, Dr. Sidney Gottlieb, was developing very different weapons with his team, called MK-ULTRA. For years Gottlieb had been studying the use of narcotics such as cocaine and mescaline, hoping that he could come up with a pharmacopoeia of substances that could be used as tactical weapons. In the early 1950s he believed he had found something that might work—lysergic acid, aka LSD. LSD seemed perfect for Gottlieb’s purposes. It was colorless, odorless, and capable of reducing sane people to babbling, disoriented idiots.

EVERYBODY MUST GET STONED

Besides conducting experiments at universities and prisons, the MK-ULTRA team tested LSD on themselves, slipping it into each other’s food and drinks without warning. But Gottlieb wasn’t interested in LSD’s effects on willing subjects; he needed to know how average folks would react when fed the drug without their knowledge.

Gottlieb’s bosses had put the kibosh on furtive civilian experiments, but Gottlieb had a better idea. Every year the MK-ULTRA team met up with the SOD (Frank’s group) for a brainstorming weekend. These were men who worked around hazardous chemicals all the time. Surely it would be okay to doctor their cocktails.

Two days into the meeting, November 19, 1953, Gottlieb struck. He gathered a group together—eight colleagues including himself and Olson—and made everyone a cocktail. Twenty minutes later he let them in on his little secret: their drinks were spiked.

Within an hour, Olson began acting strangely. He was paranoid, convinced there was a CIA plot to discredit him. He wept, laughed, ranted, and howled. Gottlieb was nonplussed. None of his test subjects had acted this way before. And it went on and on. The next morning, all the other unwitting trippers had come down, but Frank was still disturbed and fearful. Not knowing what else to do, Gottlieb allowed him to return home.

A new Frank Olson came back to his family. Instead of the loving and cheerful husband and father, Frank was suspicious and depressed. Gottlieb took responsibility. He sent Olson to a Manhattan psychotherapist who for years had administered LSD to his patients in order to study its effects on sex and addiction. Dr. Harold Abramson tried to talk Olson down—the patient was holding forth on the CIA’s plans to get him, humiliate him, and slip him drugs to keep him awake. He was afraid he’d be made to disappear; he heard voices and believed that agents were waiting everywhere to arrest him.

Stymied, Abramson and Gottlieb agreed Olson should be put in a psychiatric hospital. Just before he was to be admitted, Olson was sharing a hotel room with a CIA scientist who’d brought him to New York. In the middle of the night, just nine days after Frank ingested the LSD, the agent awoke in time to see Frank Olson dashing across the room and crashing through the window. By the time the agent was able to reach the window and look a long 10 stories down, Frank Olson was dead.

CIA officials soon found out what had happened. In the interest of national security, they elected to cover it up. Alice Olson was told that her husband had died of a “classified illness,” and she received two-thirds of his salary as a pension. The CIA admonished Sid Gottlieb but didn’t halt his experiments—instead they ordered that LSD be tested instead on street prostitutes and other people who they figured wouldn’t much be missed if they went astray. The LSD experiments continued for 10 more years.

But Frank Olson’s unusual death didn’t remain a secret. In December 1974, the New York Times broke the story of the CIA’s mind-control experiments, and eventually it was revealed that at least one subject had died after being fed LSD. The Olson family realized that subject was Frank. They told his story to the national media, winning a $750,000 settlement in 1976—and a personal apology from President Gerald Ford.