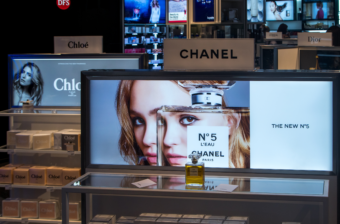 You’ve heard that clothes make the man? Meet the suit that made the woman.

Gabrielle “Coco” Chanel was born in Samur, France, in 1883. Her life got off to a rocky start. Her mother died shortly after Gabrielle’s birth, and her father took off, abandoning the five Chanel children. Gabrielle was raised in a local Catholic orphanage until she came of age, at which point the nuns found her a job at a local boutique, the House of Grampayre.

The little shop assistant honed her skills as a seamstress, and soon she had a faithful following of customers who came directly to her for alterations. She also worked at a tailor shop once a week. And in addition to her two day jobs, did some moonlighting as a café and concert singer for a few years. She used to sing one of those sad French songs about a poor girl who lost her little dog, Coco—that’s where her nickname came from.

WITH A LITTLE HELP FROM MES AMIS

She did very well in the male companionship department: two of her lovers—a military officer and an English industrialist—bankrolled her first millinery shop in Paris in 1909. It didn’t take her long to establish herself as a leading fashion designer. 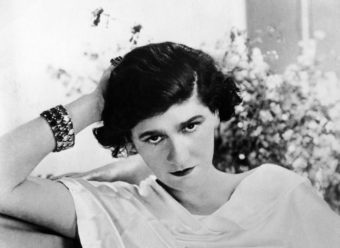 In 1920, Chanel borrowed an idea from Charles Frederick Worth, the founding father of French couture. Worth had created the first woman’s suit with a masculine shirt combo back in 1869, believe it or not. Chanel’s version was made up of a cardigan jacket, skirt, and shirt. At the time, women were starting to join the workforce—and even to drive automobiles. Her designs emphasized clean, flowing lines with plain colors—usually gray, beige, and navy—and fabrics associated with menswear: knit and wool jersey.

What made a Chanel suit so remarkable wasn’t simply the boxy design, exquisite fabrics, or the perfect hand-sewing, but the practical details. The suit was designed to be worn loose in the belly to accommodate the average woman’s figure. The slim skirt didn’t pull or crease when a woman moved around. A ribbon was sewn into the waist of the skirt to keep a blouse properly in place, and a side zipper made getting in and out of the skirt more efficient. The hemline was progressive for the time, since it made women’s ankles visible. The collarless jacket, made of light fabric weighted down by a gold chain, resembled a cardigan-style sweater. Both the suit jacket and the skirt featured coordinating trim—typically braided—and lining.

At the time, the Chanel suit was truly a couture creation, only accessible to the wealthiest of women, who had the funds to go to Paris for up to seven (count ’em, seven) fittings. The high price tag didn’t curb the public’s enthusiasm for her designs though.

The first perfume named for a designer, the ever-classic Chanel No. 5, was introduced in 1923. The late 1920s saw the introduction of classic Chanel designs—the little black dress and the cardigan jacket. In the 1930s Samuel Goldwyn hired her to dress some of his stars. She also developed a line of costume jewelry inspired by the Art Deco movement. Sales and her success continued unabated until WWII and the Nazi occupation of Paris, which cast a pall on the fashion business—among other things.

An affair with a Nazi officer during the German occupation of France hurt her popularity and sales suffered, but Coco staged a comeback in February 1954. Life magazine ran a four-page spread that raved about Chanel’s comfortable style and the following month, a navy blue Chanel suit appeared on the cover of French Vogue. She also appropriated clothing styles worn by men and introduced sports clothes for women including bell bottom pants and pea jackets. Chanel fever had struck once again. In 1969 Katharine Hepburn played her in the Broadway show Coco.

When Coco Chanel died in 1971, her custom suits were fetching as much as $12,000 (10,000 euros) or about $72,000 today. Several of her assistants assumed command of her design house, but sales stagnated until Karl Lagerfeld stepped in as chief designer in 1983. Lagerfeld catered to a younger clientele, while keeping Chanel’s signature sense of modernity, style, and silhouette intact. In 1991, he successfully paired the Chanel jacket with trendy denim miniskirts. In 2001, he designed his entire fall couture collection without a single skirt; he liberated the jacket as a stand-alone symbol of Chanel style.

Through decades of hit-or-miss trends, the Chanel suit has stayed the course on the catwalk. At an average of $5,000 (4,000 euros) for a ready-to-wear suit (the vintage pieces can fetch more), the Chanel suit still claims a unique place in the history of fashion.